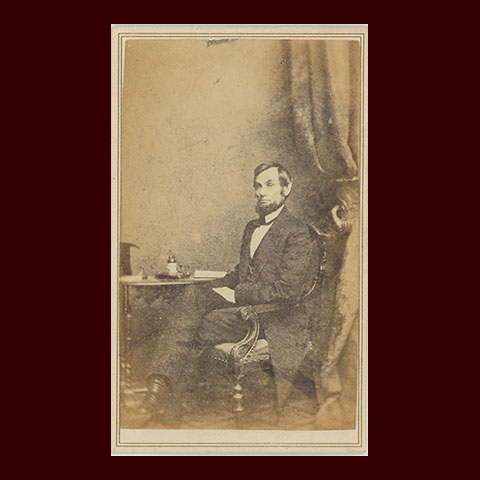 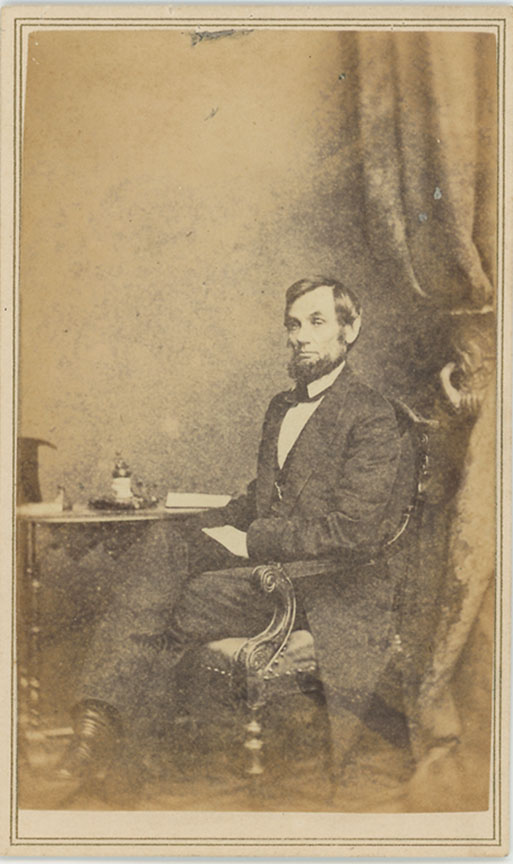 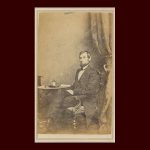 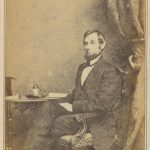 Not in Ostendorf or Kunhardt

Taken on Lincoln’s second visit to Brady’s Gallery, most likely by Alexander Gardner, who had been the camera operator on the first visit.

Lincoln’s hat, an inkwell, and a book sit atop the table, while Lincoln stares directly into the camera.  While Lincoln’s right eye seems to seer itself into viewer, his eyelid droops half-way down his left eye (Ostendorf calls it heavy and “froglike”).  Unlike at his first visit, this time Lincoln’s unruly hair had been slicked down.

Neither Ostendorf (Lincoln’s Photographs:  A Complete Album) nor Kunhardt (The Photographs of Abraham Lincoln) reproduce this present image “ which may have been taken by a multi-lens camera.  Ostendorf shows two stereotype images (certainly taken at the same time) but not this one; nor are they included in Kunhardt.  Kunhardt shows an entirely different image with more space on the right margin but certainly taken at the same moment as those in Ostendorf.

The present carte exhibits more of Lincoln’s hat and table legs at the left margin.  On the right margin it shows more of the curtain than does Ostendorf, though just slightly less than in the one Kunhardt image.

Cartes from the first Brady session are quite common; those from this second sitting not so much.  A most uncommon, perhaps unique, image of Lincoln!