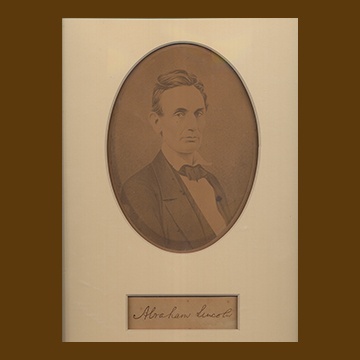 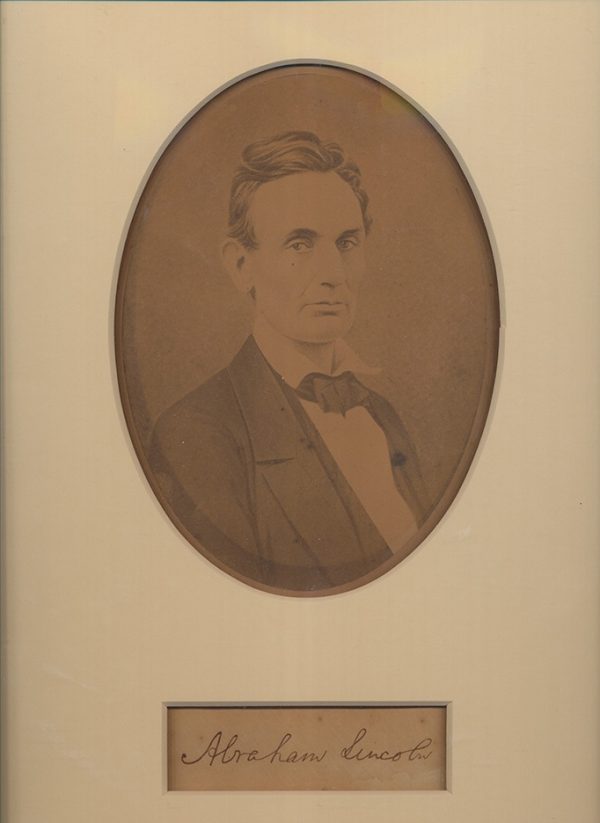 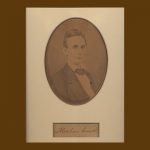 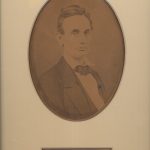 A bold and full Abraham Lincoln signature, matted with an early, from life, photograph of Abraham Lincoln. Lincoln was returning home from speaking in Milwaukee at the Wisconsin State Fair, Stopping a couple of days in Chicago.

Lincoln’s unsuccessful 1858 Senate race against Stephen Douglas had won him some national recognition and he was in demand now as a speaker.  Chicago photographer Samuel Fassett asked Lincoln to sit for him. Fassett recalled, “I made then one negative and as that was in the beginnings of photography–one good result was thought sufficient.” Mr. Lincoln told me that he had sat for daguerrotypes, ambrotypes, etc., but never before for a (paper) photograph; therefore to me belongs the honor of having made the first photograph of that great and good man.” “I can’t tell you how many prints were made from my negative of Lincoln. I began printing copies as rapidly as possible as the demand was very great.” Mary Lincoln pronounced the image “the best likeness” she had seen of her husband.

The negative was destroyed in the great Chicago fire of October 1871. These salted paper prints of Lincoln are quite scarce, seldom coming on the market; when they do they command a premium price.

Some spotting, but much better than the badly stained examples that have appeared in the market in recent years.  This is the earliest paper photograph of Lincoln taken from life.

The iron gall ink signature is 3-3/4 inches long.  The salt print is 7-¼ x 5-¼  inches (oval sight), on an original irregularly cut, oval mount, retouched. This bold signature is unusually large.  The photograph, though showing a bit of prior framing at the edge, is a handsome example of the early Lincoln.