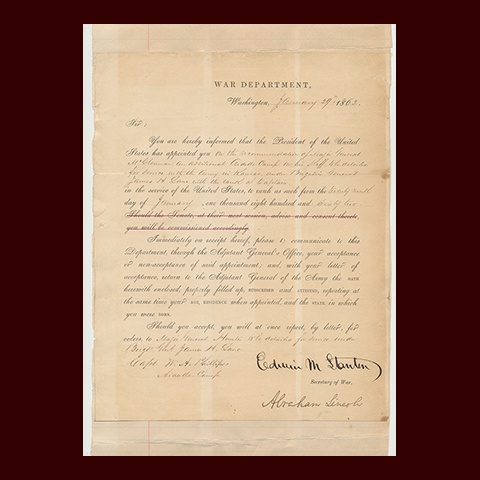 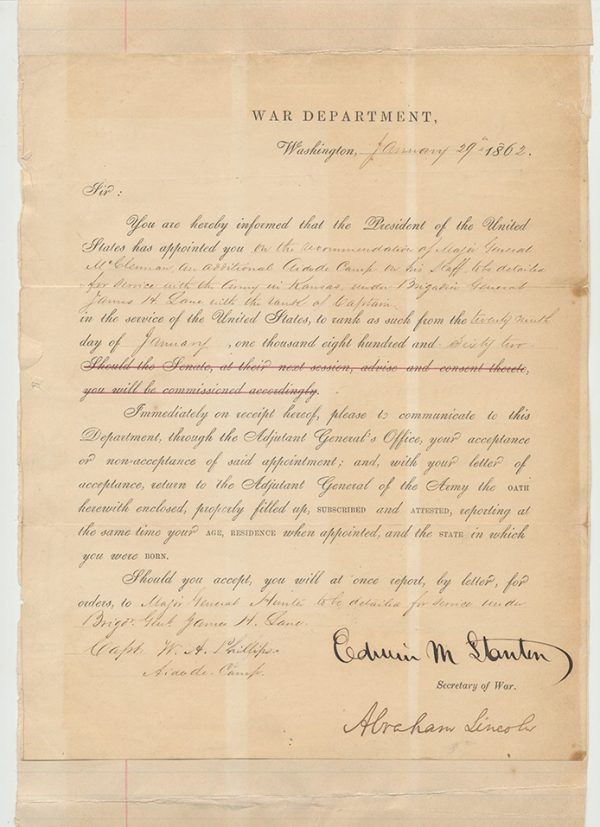 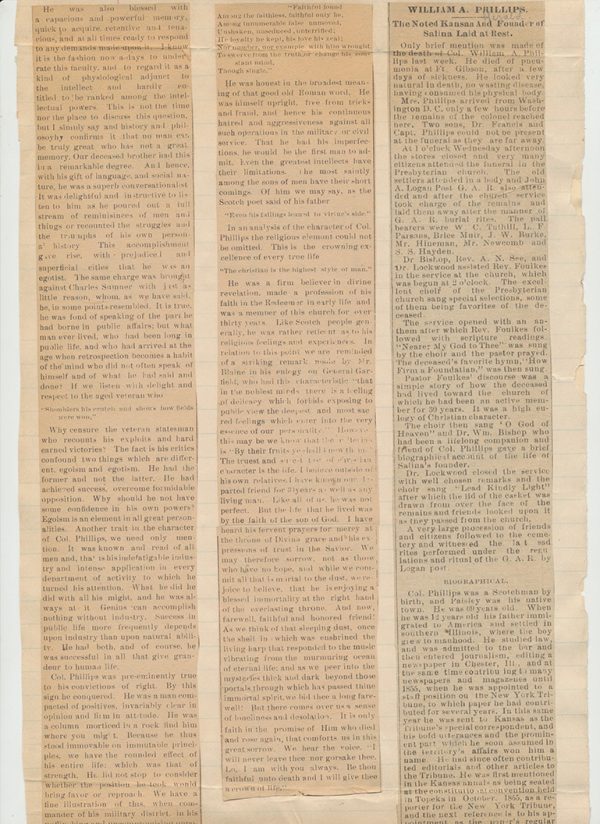 Abraham Lincoln signature on a Military Commission for a soldier who rode with John Brown, and headed the first brigade of Native Americans.

Lincoln here appoints Capt. William A. Phillips as an additional aide-de-camp of General McClellan (at his request), specifying that he is being detailed to serve “with the army in Kansas under Brigadier General James H. Lane with the rank of Captain.”

There is only one other known copy of  such a document signed by Lincoln on the same morning as was this one.

A COMMISSION “CHOCK FULL OF STORIES”!

Being a War Department document (on printed letterhead), Stanton is the primary signer.  Why Lincoln was compelled to sign it with an official full signature  is not known; there is no apparent need and certainly no space provided on the document for him to do so.

Of interest is that the printed line informing an appointee that the U. S. Senate in its next session would “advise and consent thereto” is crossed out in red pencil by a clerk.  Perhaps in lieu of that, the President was asked to make the Phillips appointment on the spot and immediately official.  (Common military commission documents mandate the “advise and consent” of the Senate.)

Affixed to a slightly larger sheet, with newspaper clippings about Phillips are on the reverse; obviously the family felt it important enough to document it themselves.  This came directly from the Phillips family who had it in a family scrapbook.

In very good condition, with irregular toning, a split to the end of a horizontal fold, and several small edge tears.

On 1858 William A. Phillips (1824-90), the recipient of this commission, co-founded Salina, Kansas, and became the first Justice of the Kansas Supreme Court under the Lecompton Constitution. In 1861 Senator James H. Lane, noted militia commander of the Kansas Red Legs or Jayhawkers, made a number of raids into Missouri.

Lane’s sacking of the town of Osceola inspired the novel Gone to Texas, which was the basis for the 1976 Clint Eastwood movie The Outlaw Josey Wales.

In December 1861 President Lincoln appointed Lane a Brigadier General of Volunteers. As a fellow Kansan, Phillips requested and was granted a captaincy on Lane’s staff ; which is this commission.  On March 1, 1862 Lane’s own commission was canceled following concerns that a sitting U.S. Senator could not simultaneously hold a general’s commission.  Eight days later, seeing his position with Lane vanish, Phillips obtained a commission as a Major in the U.S. Army. By then, he had already obtained his new commission and was assigned to command the First Regiment Indian Home Guard.

In July 1862 he was made Colonel commanding the Third Regiment Indian Home Guard. He was later made commander of the only all Native American Brigade in the U.S. Army. Post-war, Phillips served as legal counsel for the Cherokee Nation and as a two-term U.S. Congressman from Kansas.

Provenance: the collector from which this came had purchased said document from a West Virginia coin dealer nearly 40 years ago. It had come to that  dealer from a descendant of the Phillips family in a lot sale containing many other Phillips-associated items.