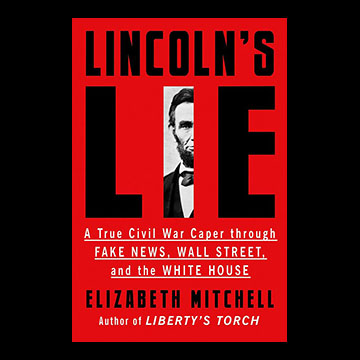 Reveals How Lincoln Manipulated the Media

In Lincoln’s Lie, Elizabeth Mitchell brings to life the remarkable story of the manipulators of the news and why they decided to play such a dangerous game during a critical period of American history. This account of Lincoln’s troubled relationship to the press and its role in the Civil War is one that speaks powerfully to our current political crises: fake news, profiteering, Constitutional conflict, and a president at war with the press.

In 1864, during the bloodiest days of the Civil War, two newspapers published a call, allegedly authored by President Lincoln, for the immediate conscription of 400,000 more Union soldiers. New York streets erupted in pandemonium. Wall Street markets went wild. When Lincoln sent troops to seize the newspaper presses and arrest the editors, it became clear: The proclamation was a lie. Who put out this fake news? Was it a Confederate spy hoping to incite another draft riot? A political enemy out to ruin the president in an election year? Or was there some truth to the proclamation”far more truth than anyone suspected?

Unpacking this overlooked historical mystery for the first time, journalist Elizabeth Mitchell takes readers on a dramatic journey from newspaper offices filled with heroes and charlatans to the haunted White House confinement of Mary Todd Lincoln, from the packed pews of the celebrated preacher Reverend Henry Ward Beecher’s Plymouth Church to the War Department offices in the nation’s capital and a Grand Jury trial.

As New, Signed on Bookplate