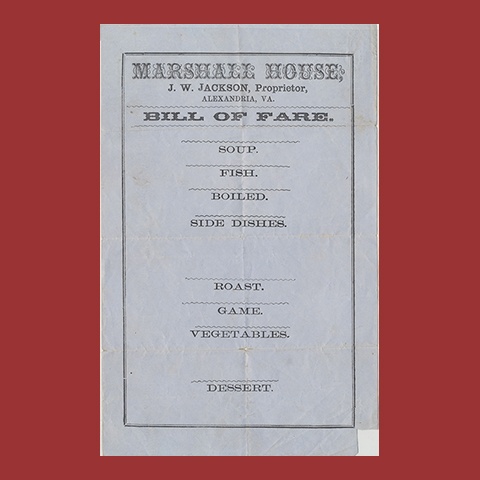 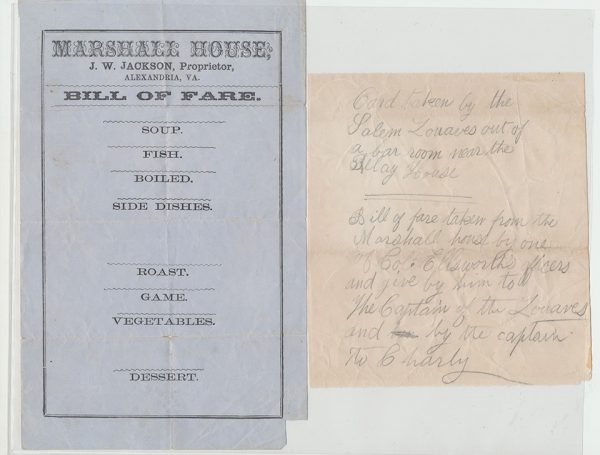 A Relic of the First Civil War Officer’s Death

Original Menu from Marshall House where Elmer Ellsworth, along with Sergeant Francis  Brownell and a few other Zouaves, went to haul down a secessionist flag flying on the roof.  The owner, J. W. Jackson, shot Ellsworth as he was descending the stairs clutching the flag, was in turn shot by Brownell.

Ellsworth was the first Union officer to be killed in the Civil War while Brownell became known as “The Avenger.” WITH a contemporary 1-page handwritten note explaining that it was “taken from the Marshall House by one of Col. Ellsworth’s Officers and given by him to the Captain of the Zouaves and by the Captain to Charlie” — on the verso the Captain is identified as Arthur Devereaux and Charlie as Clerk Charles A. Dearborn, Jr.  The note further states that it was taken “out of a bar room near the Relay House.”

Born in Pennsylvania in 1837, Elmer Ellsworth moved to Springfield, IL in 1860, taking a job as a law clerk in Abraham Lincoln’s office. The young clerk and Lincoln became friends; truthfully more like family. When the president-elect moved to Washington in 1861, Ellsworth accompanied him. After Ellsworth was killed removing a Confederate flag from The Marshall House, Lincoln eulogized him as “the greatest little man I ever met”. After his death, Ellsworth’s body lay in state at the White House. The phrase, “Remember Ellsworth”, became a rallying cry and call to arms for the Union Army.