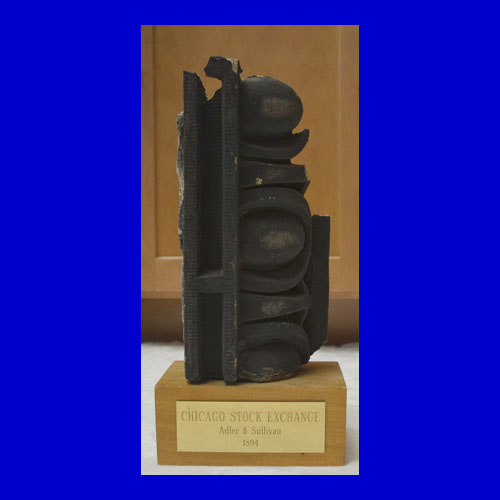 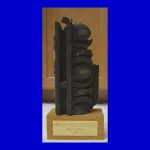 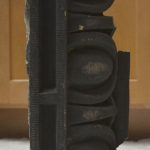 An Architectural Treasure from
Chicago’s Past

This relic from the Chicago Stock Exchange Building was salvaged from the rubble.

The Chicago Stock Exchange building opened in 1894. Created by the iconic architectural firm of Sullivan and Adler, it was an early adopter of steel frame construction. Prior to that, buildings were supported only by their own walls; limiting their height. By creating a steel girder frame, architects and builders could create tall, slender buildings with a strong and relatively lightweight steel skeleton. The rest of the building elements”walls, floors, ceilings, and windows”were suspended from the skeleton, which carried the weight. It was an innovation that gave us the modern skyscrapers we have today.

The Chicago Stock Exchange Building stood as a Chicago landmark for almost 80 years. But by the late 1960s “urban renewal” was a serious threat to many of the Adler & Sullivan treasures. Mayor Daley had the building on his radar and it was slated for demolition. This did not sit well with preservationists; in fact it was the impetus of the preservation movement here. There was a great deal of pushback but in the end the preservationists lost and the demolition went forward as planned.

At the front of that movement was photographer and Sullivan enthusiast, Richard Nickel. As the demolition date moved closer, Nickel worked tireless to salvage artifacts from the building. The night before the demolition date Nickel lost his life doing what he loved. He fell sometime that night while saving architectural relics. He was found 26 days later, 10 feet deep in the sub basement.

Nickel lost the battle, but he won the war. Thanks largely to his efforts, Chicago’s architectural preservation efforts are strong today. Many of his cohorts went on to become some of Chicago’s most respected architects, which has strengthened the program even more. We have a long way to go in the neighborhoods, but downtown boasts some of the best architecture-both vintage, modern and beyond-in the world.  Learn More About Richard Nickel

Two important parts of the Chicago Stock Exchange survive at The Art Institute. The trading room is reconstructed largely from original materials. The monumental terra cotta arch over the entryway occupies a coveted space on the museum grounds.

Originally, the building was terra cotta in color. Over the decades, pollution caused the building materials to turn black.