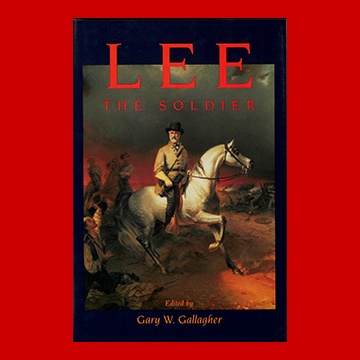 Gary Gallagher’s Lee the Soldier is a unique one-volume source of writing by and about Robert E. Lee in which readers can explore all facets of the general’s military leadership.

Part One consists of a series of postwar conversations in which Lee spoke candidly about his campaigns. These comments reveal strong opinions about his lieutenants, policies adopted by the Confederate government, and the writings of former Confederate officers.

The eleven essays in Part Two offer important summary analysis of the quality and effect of Lee’s generalship. The authors in this section range from Jubal Early, who penned the quintessential Lost Cause celebration of Lee’s role, to a group of later writers who differed dramatically with those views.

The ten essays in Part Three narrow the focus to specific campaigns, with an emphasis on Gettysburg.

In Part Four, we get T. Michael Parrish’s The R.E. Lee 200: An Annotated Bibliography of Essential Books on Lee’s Military Career.