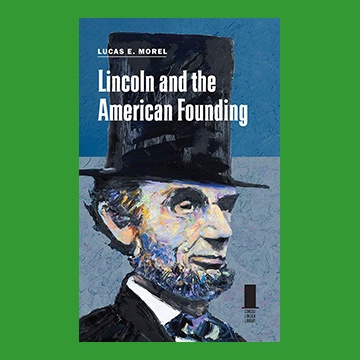 How Did Lincoln See the Founding of America?

Lucas E. Morel’s Lincoln and the American Founding examines Lincoln’s reverence for the principles at the heart of the founding of America.

In this persuasive work of intellectual history, Lucas E. Morel argues that the most important influence on Abraham Lincoln’s political thought and practice was what he learned from the leading figures of and documents from the birth of the United States. In this systematic account of those principles, Morel compellingly demonstrates that to know Lincoln well is to understand thoroughly the founding of America.

With each chapter describing a particular influence, Morel leads readers from the Founding Father, George Washington; to the founding documents, the Declaration of Independence and Constitution; to the founding compromise over slavery; and finally to a consideration of how the original intentions of the Founding Fathers should be respected in light of experience, progress, and improvements over time. Within these key discussions, Morel shows that without the ideals of the American Revolution, Lincoln’s most famous speeches would be unrecognizable, and the character of the nation would have lost its foundation on the universal principles of human equality, individual liberty, and government by the consent of the governed.

Lincoln thought that the principles of human equality and individual rights could provide common ground for a diverse people to live as one nation and that some old things, such as the political ideals of the American founding, were worth preserving. He urged Americans to be vigilant in maintaining the institutions of self-government and to exercise and safeguard the benefits of freedom for future generations. Morel posits that adopting the way of thinking and speaking Lincoln advocated, based on the country’s founding, could help mend our current polarized discourse and direct the American people to employ their common government on behalf of a truly common good.

As New, d.j. Signed on Bookplate

Dr. Morel joined us on A House Divided. Watch the program below: