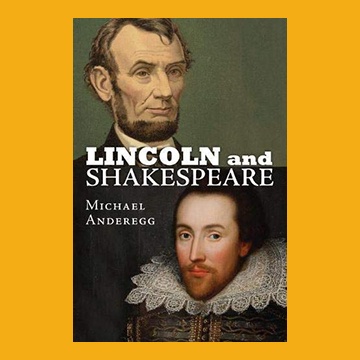 In Lincoln and Shakespeare, Michael Anderegg for the first time examines in detail Lincoln’s fascination with and knowledge of Shakespeare’s plays.

It was the measure of Shakespeare’s poetic greatness, an early commentator remarked, that he thoroughly blended the ideal with the practical or realistic. “If this be so,” Walt Whitman wrote, “I should say that what Shakespeare did in poetic expression, Abraham Lincoln essentially did in his personal and official life.” Whitman was only one of many to note the affinity between these two iconic figures.

Novelists, filmmakers, and playwrights have frequently shown Lincoln quoting Shakespeare. Separated by centuries and extraordinary circumstances, the two men clearly shared a belief in the power of language and both at times held a fatalistic view of human nature. While citations from Shakespeare are few in his writings and speeches, Lincoln read deeply and quoted often from the Bard’s work in company, a habit well documented in diaries, letters, and newspapers.

Anderegg discusses Lincoln’s particular interest in Macbeth and Hamlet and in Shakespeare’s historical plays, where we see themes that resonated deeply with the president –the dangers of inordinate ambition, the horrors of civil war, and the corruptions of illegitimate rule. Anderegg winnows confirmed evidence from myth to explore how Lincoln came to know Shakespeare, which editions he read, and which plays he would have seen before he became president.

Once in the White House, Lincoln had the opportunity of seeing the best Shakespearean actors in America. Anderegg details Lincoln’s unexpected relationship with James H. Hackett, one of the most popular comic actors in America at the time: his letter to Hackett reveals his considerable enthusiasm for Shakespeare. Lincoln managed, in the midst of overwhelming matters of state, to see the actor’s Falstaff on several occasions and to engage with him in discussions of how Shakespeare’s plays should be performed, a topic on which he had decided views. Hackett’s productions were only a few of those Lincoln enjoyed as president, and Anderegg documents his larger theater-going experience, recreating the Shakespearean performances of Edwin Booth, Charlotte Cushman, Edwin Forrest, and others, as Lincoln saw them.