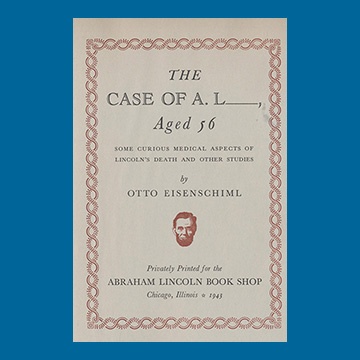 Otto Eisenschiml’s The Case of A.L., Aged 56, is a factual account of the medical aspects of Lincoln’s wounds, with a chapter on whether he could have been saved. The title comes from the two-line mention in the massive Medical and Surgical Records of the War of the Rebellion.

Eisenschiml was well published in both the chemistry and history fields. Among his accomplishments are the formulation of one of the first deodorants, much improving the design of the window envelope, and rustproof barbed-wire. The barbed wire was used by armies in Flanders in World War I.

Eisenchiml wrote at least ten books related to Lincoln and the Civil War. Many,  including this one, are focused on the Lincoln Assassination. His best-selling title detailed a conspiracy theory that put Stanton at the top of a plot to carry out the assassination. Building is case on circumstantial evidence, the theory was largely discredited by the experts of the day. His first book about the Lincoln Assassination inspired the Broadway play, Your’s A. Lincoln.

Excellent; inscribed and signed to a fellow chemist.

Watch Take a Break With History