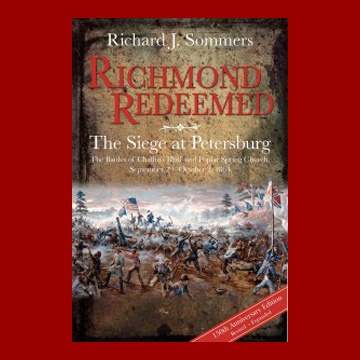 Readers will rejoice that Richard J. Sommers’s masterpiece, Richmond Redeemed in a revised Sesquicentennial edition, is once again available.

The original (and long out of print) award-winning 1981 edition conveyed an epic narrative of crucial military operations in early autumn 1864 that had gone unrecognized for more than 100 years. This book provides thrilling narrative of opportunities gained and lost, of courageous attack and desperate defense, of incredible bravery by Union and Confederate soldiers from 28 states, Maine to Texas.

Fierce fighting by the U.S. Colored Troops earned their soldiers thirteen Medals of Honor and marked Chaffin’s Bluff as the biggest, bloodiest battle for the USCT in the whole Civil War. In addition to his focused tactical lens, Dr. Sommers offers rich analysis of the generalship of Ulysses S. Grant, Robert E. Lee, and their senior subordinates, Benjamin Butler, George G. Meade, Richard S. Ewell, and A. P. Hill. The richly layered prose of Richmond Redeemed, undergirded by thousands of manuscript and printed primary accounts from more than 100 archives, has been enhanced for this Sesquicentennial Edition with new research, new writing, and most of all new thinking.

Teaching future strategic leaders of American and allied armed forces in the Army War College, conversing with fellow Civil War scholars, addressing Civil War audiences across the nation, and reflecting on prior assessments over the last 33 years have stimulated in the author new perspectives and new insights. He has interwoven them throughout the book. His new analysis brings new dimensions to this new edition. Dr. Sommers was widely praised for his achievement.

In addition to being a selection of the History Book Club, the National Historical Society awarded him the Bell Wiley Prize as the best Civil War book for 1981-82. Reviewers hailed it as “a book that still towers among Civil War campaign studies” and “a model tactical study [that] takes on deeper meaning… without sacrificing the human drama and horror of combat.” Complete with maps, photos, a full bibliography, and index Richmond Redeemed is modeled for a new generation of readers, enthusiasts, and Civil War buffs and scholars, all of whom will welcome and benefit from exploring how, 150 years ago, Richmond was redeemed.

Richard joined us on Virtual Book Signing in January 2015. Watch the program.