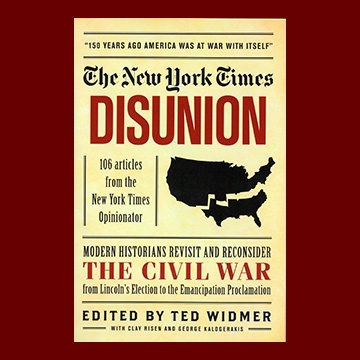 In New York Times Disunion: Historians Consider the Civil War in the New York Times, Ted Widmer,  along with Clay Risen and George Kalogerakis, review some of New York Times blog posts from the Disunion series.

The series took a look at the Civil War during the Sesquicentennial of the conflict. Following the chronology of the Secession Crisis and the Civil War, the contributors, who include modern scholars, journalists, historians, and Civil War buffs offer ongoing commentary on the Civil War as it unfolded. Ted Widmer and his colleagues have selected articles from the series that represent the best in this award winning series. Contributors include Ken Burns, Harold Holzer, Amanda Foreman, William Freehling, and others.

Since its debut on November 6, 2010, the Disunion blog has published more than 400 original articles and won multiple awards, including “Best History Website”from the New Media Institute and the History News Network. New York Times: Disunion is an essential new addition to our continuing national discourse on Civil War history.