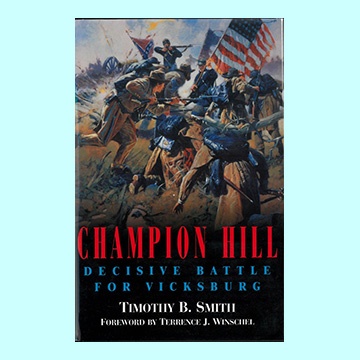 Timothy B. Smith’s Champion Hill: Decisive Battle for Vicksburg, is the story of the high stakes military chess game was played across the state of Mississippi in the spring of 1863.

The match climaxed on May 16 at Champion Hill, where the decisive land engagement of the Vicksburg campaign was fought. After several attempts to capture the “Confederate Gibraltar” ended in failure, Grant boldly crossed the Mississippi south of the city and advanced inland. Opposing him was John C. Pemberton, who fatefully moved out of Vicksburg to confront Grant. The Union victory at Champion Hill sealed the fate of both Vicksburg and her field army, and propelled Grant into the national spotlight.

“Perhaps more significant than any larger or bloodier actions of the Civil War, the Battle of Champion Hill was the decisive action of the campaign for Vicksburg, led directly to the fall of the Confederate bastion on the Mississippi River and, truly, sealed the fate of Richmond. Tim Smith has risen to the challenge to help fill this void in the vast field of literature on the Civil War and adds a desperately needed volume to the scholarly works available on the Vicksburg campaign. With a talented pen, he has produced the first ever full-length study of the Battle of Champion Hill.” – Terry J. Winschell, Former Chief Historian, Vicksburg National Military Park, from his Foreword.

As new; in dust jacket. Signed.