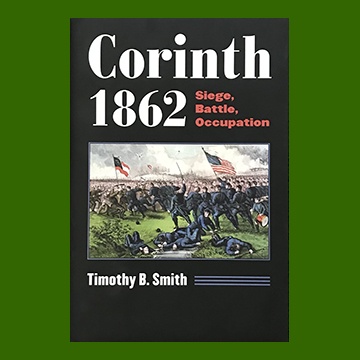 Timothy B. Smith’s Corinth 1862: Siege, Battle, Occupation was the first book to tell the story of the most crucial crossroads in the west in larger context than just the October, 1862 battle. Despite its significance to the war, Corinth has received comparatively little attention from historians and has been largely overshadowed by events at Shiloh, Antietam, and Perryville. Timothy Smith’s panoramic and vividly detailed look corrects that neglect, focusing on the nearly year-long campaign that opened the way to Vicksburg and presaged the Confederacy’s defeat in the West.

Combining big-picture strategic and operational analysis with ground-level views, Smith covers the spring siege, the vicious attacks and counterattacks of the October battle, and the subsequent occupation. He has drawn extensively on hundreds of eyewitness accounts to capture the sights, sounds, and smells of battle and highlight the command decisions.

Weaving together an immensely compelling tale that places the reader in the midst of war’s maelstrom, it substantially revises and enlarges our understanding of Corinth and its crucial importance in the Civil War.

A near fine copy of a scarce book; inscribed and signed.