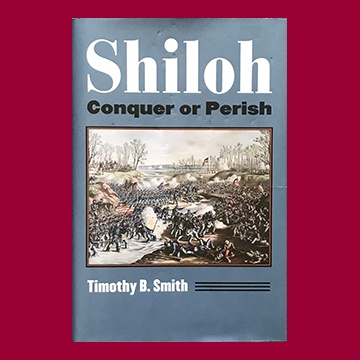 “We Must This Day Conquer or Perish…”

Timothy B. Smith’s Shiloh: Conquer or Perish quickly established itself as the finest battle study of the first of the giant battles of the Civil War–battles that changed the way wars were fought.

The Battle of Shiloh has been the subject of many books. However, none has told the story of Shiloh as Timothy Smith does in this volume, the first comprehensive history of the two-day battle in April 1862. Unfolding over April 6-7, 1862, Shiloh produced the most sprawling and bloody field of combat since the Napoleonic wars, with an outcome that set the Confederacy on the road to defeat.

Contrary to previous histories, Smith tells us, the battle was not won or lost on the first day. Devoting unprecedented attention to the details of that second day, his book shows how the Union’s triumph was far less assured, and much harder to achieve, than has been previously acknowledged. By breaking his analysis of both days’ fighting into separate phases and sectors, Smith makes it much easier to grasp what was happening in each combat zone, why the battle unfolded as it did, and how it related to the broader tactical and operational context. The battlefield’s diverse and challenging terrain comes in for new scrutiny.

The experience of the soldiers finds its place here too, as Smith lets us hear the voices of the common man, whether combatant or local civilian, caught up in a historic battle for their lives. “We must this day conquer or perish,” Confederate General Albert Sidney Johnston declared on the morning of April 6, 1862. His words proved prophetic and might serve as an epitaph for the larger war, as we see fully for the first time in this unparalleled and surely definitive history of the Battle of Shiloh.