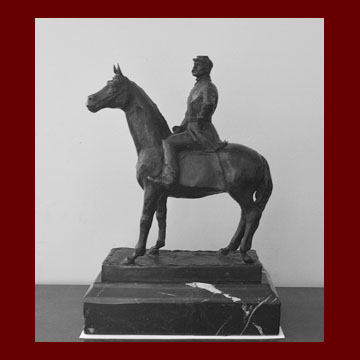 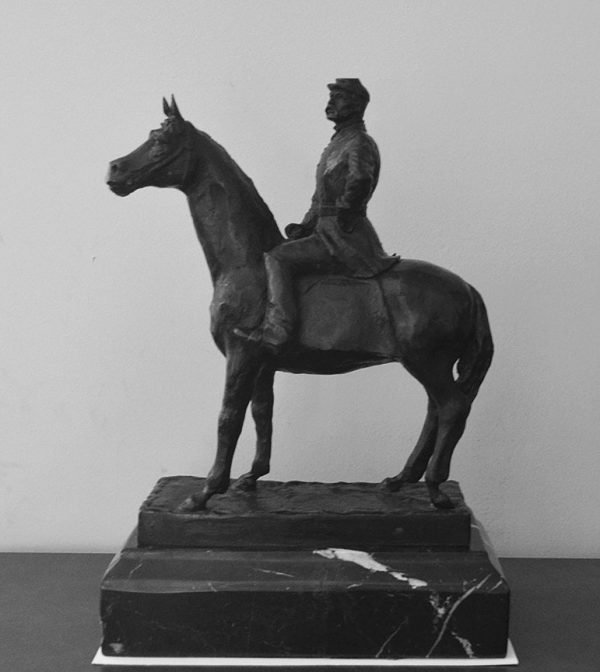 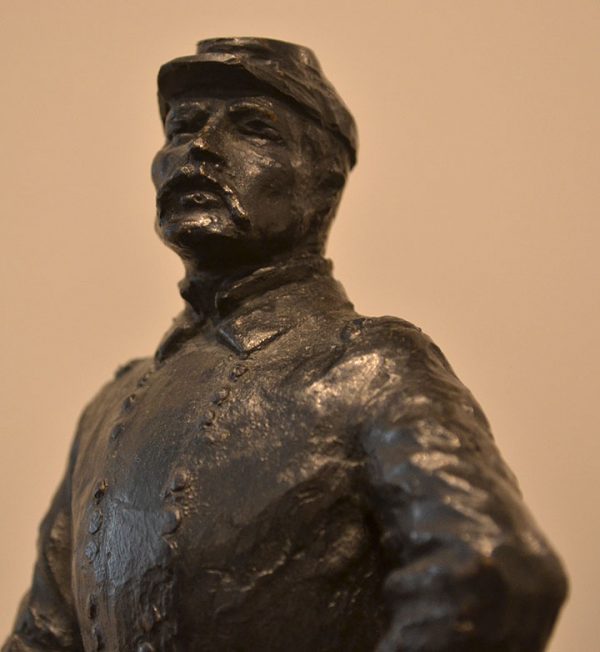 This black bronze features Philip Sheridan astride Rienzi. Rienzi, the subject of Thomas Buchanan Read poem, Sheridan’s Ride, would be renamed Winchester after the Battle of Cedar Creek. As the statue is dated 1986, it as assumed it was created in honor of the Centennial of the fort.

Ft. Sheridan, named for Philip Sheridan, honors his service in the Civil War as well as his dedication to the people of Chicago after the Chicago Fire and the Haymarket Riots. Established in 1886, the fort was founded as a result of a petition initiated by Marshall Field.  The history of the area dates to the late 17th Century.  It was decommissioned in the 1990s. The buildings have been well-preserved, yet thoughtfully updated. The area is now a park and residential area. You can learn more about Fort Sheridan and its history here.

Bocchetta’s work is represented on the USS Abraham Lincoln, by a large bronze bust of Lincoln by George Bissell “ produced from an original casting in the Chicago History Museum.

On a very personal note, Bocchetta had a long friendship with the Abraham Lincoln Book Shop and with Chicago (see below). Daniel Weinberg (our owner and president) recalls Bocchetta sharing these life masks with him in his early days at the book shop.

Excellent condition, beautifully rendered faces on Sheridan and Rienzi. The black and white marble base has some chipping and some crazing.

Born in Sassari, Sardinia, Bocchetta came from a family of artists but was discouraged from developing his talents for they would distract him from his studies. He received a degree in classical humanities in Cagliari in 1938. Then, he returned to Verona and was admitted to the University of Florence, faculty of classical humanities and history of philosophy, where he graduated in 1944.

As member of the Italian anti-facist resistance movement during World War II, he experienced first-hand the horrors of interrogation, forced labor and torture.

Post-war, he fled Italy for Argentina because “the same fascists in different shirts were in power.”  His academic credentials were not accepted for a university teaching position there, so he was forced to accept a job in a ceramics factory, where he realized his talent in sculpture. In 1958, while visiting America,  a military coup occurred. Bocchetta decided not to return; abandoning many projects. Unable to find work because of his limited English skills, he painted murals. They are unsigned because he detested doing the work.

Bocchetta had an almost 30 year history here in Chicago, studying and teaching at the university level as well as teaching Italian on a public television program, publishing scholarly books on the Latin and Spanish Golden Age and making public monuments. His friendship with Abraham Lincoln Book Shop also dates from this era.

Three of his works are viewable today; The Egg Man and Man in the Sand are at 201 E. Chestnut and Mother Earth originally stood in the courtyard of the Public Library. The building, a Beaux Arts treasure, housed the GAR meeting hall as well. The building escaped demolition thanks in large part to a group of civic-minded preservationists, one of which was the book shop’s founder. It then became the Chicago Cultural Center. After a thoughtful and much-lauded building renovation, Mother Earth was moved to the Popular Library at the Harold Washington Library, where it stands today. All three are similar in style to his contemporary, Henry Moore.

Ever a creative, Bocchetta used various materials like bronze, stainless steel, alabaster, and marble.  He also experimented with overlaying a plastic core with bronze.

At 95 he is still working today. He was honored with a retrospect of his work called The Life and Art of Vittore Bocchetta during the spring of 2015, in Cagliari in Sardinia, Italy.