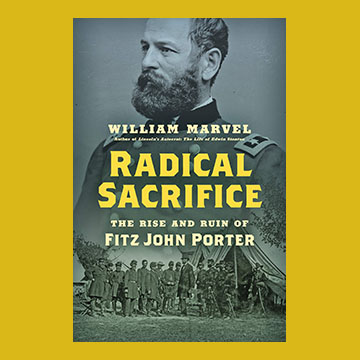 William Marvel’s Radical Sacrifice: The Rise and Ruin of Fitz John Porter provides a fresh portrait of the most famous legal-military controversy of the Civil War.

Born into a distinguished military family, Fitz John Porter (1822-1901) was educated at West Point and breveted for bravery in the war with Mexico. Already a well-respected officer at the outset of the Civil War, as a general in the Union army he became a favorite of George B. McClellan, who chose him to command the Fifth Corps of the Army of the Potomac. Porter and his troops fought heroically and well at Gaines’s Mill and Malvern Hill. His devotion to the Union cause seemed unquestionable until fellow Union generals John Pope and Irvin McDowell blamed him for their own battlefield failures at Second Bull Run.

As a confidant of the Democrat and limited-war proponent McClellan, Porter found himself targeted by Radical Republicans intent on turning the conflict to the cause of emancipation. He made the perfect scapegoat, and a court-martial packed with compliant officers dismissed him for disobedience of orders and misconduct before the enemy.

Porter tenaciously pursued vindication after the war, and in 1879 an army commission finally reviewed his case, completely exonerating him. Obstinately partisan resistance from old Republican enemies still denied him even nominal reinstatement for six more years. This revealing new biography by William Marvel cuts through received wisdom to show Fitz John Porter as he was: a respected commander whose distinguished career was ruined by political machinations within Lincoln’s administration.

Marvel lifts the cloud that shadowed Porter over the last four decades of his life, exposing the spiteful Radical Republicans who refused to restore his rank long after his exoneration and never restored his benefits. Reexamining the relevant primary evidence from the full arc of Porter’s life and career, Marvel offers significant insights into the intersections of politics, war, and memory.