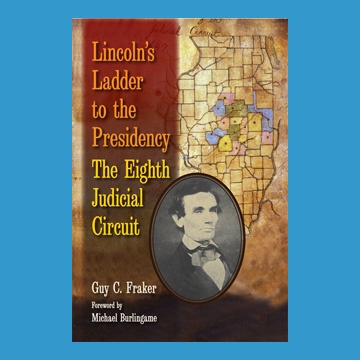 In Lincoln’s Ladder to the Presidency, Guy Fraker takes a close look at how Lincoln’s twenty-three-year legal career helped propel Lincoln to President of the United States.

Abraham Lincoln spent nearly as much time on the road as an attorney for the Eighth Judicial Circuit as he did in his hometown of Springfield, Illinois. Yet most historians gloss over the time and instead have Lincoln emerge fully formed as a skillful politician in 1858. In this innovative volume, Guy C. Fraker provides the first-ever study of Lincoln’s professional and personal home away from home and demonstrates how the Eighth Judicial Circuit and its people propelled Lincoln to the presidency. Each spring and fall, Lincoln traveled to as many as fourteen county seats in the Eighth Judicial Circuit to appear in consecutive court sessions over a ten- to twelve-week period.

Fraker describes the people and counties that Lincoln encountered, discusses key cases Lincoln handled, and introduces the important friends he made, friends who eventually formed the team that executed Lincoln’s nomination strategy at the Chicago Republican Convention in 1860 and won him the presidential nomination. As Fraker shows, the Eighth Judicial Circuit provided the perfect setting for the growth and ascension of Lincoln.

A complete portrait of the sixteenth president depends on a full understanding of his experience on the circuit, and Lincoln’s Ladder to the Presidency provides that understanding as well as a fresh perspective on the much-studied figure, thus deepening our understanding of the roots of his political influence and acumen.

Guy joined us on Virtual Book Signing in October 2012. Watch the program.