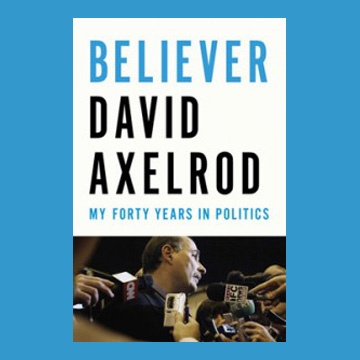 Believer is the tale of a political life well lived, of a man who never gave up on the deepest promises our country has to offer.

David Axelrod has always been a believer. Whether as a young journalist investigating city corruption, a campaign consultant guiding underdog candidates against entrenched orthodoxy, or as senior adviser to the president during one of the worst crises in American history, Axelrod held fast to his faith in the power of stories to unite diverse communities and ignite transformative political change.

Now this legendary strategist, the mastermind behind Barack Obama’s historic election campaigns, shares a wealth of stories from his forty-year journey through the inner workings of American democracy.  The heart of Believer is Axelrod’s twenty-year friendship with Barack Obama, a warm partnership that inspired both men even as it propelled each to great heights. Taking a chance on an unlikely candidate for the U.S. Senate, Axelrod ultimately collaborated closely Obama on his political campaigns, and served as the invaluable strategist who contributed to the tremendous victories in 2008 and 2012. Switching careers again, Axelrod served as senior adviser to the president during one of the most challenging periods in national history: working at Obama’s side as he battled an economic disaster; navigated America through two wars; and fought to reform health care, the financial sector, and our gridlocked political institutions.

In Believer, Axelrod offers a deeper and richer profile of this extraordinary figure–who in just four years vaulted from the Illinois State Senate to the Oval Office–from the perspective of one who was at his side every step of the way. Spanning forty years that include corruption and transformation, turmoil and progress, Believer takes readers behind the closed doors of politics even as it offers a thrilling call to democratic action. Axelrod’s Believer is a powerful and inspiring memoir enlivened by the charm and candor of one of the greatest political strategists in recent American history.