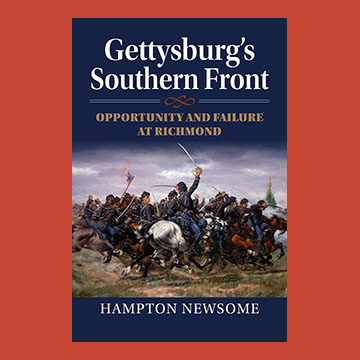 In Gettysburg’s Southern Front: Opportunity and Failure at Richmond Hampton Newsome offers an in-depth look into this little-known Federal advance against Richmond during the Gettysburg Campaign. The first full-length examination of Dix’s venture, this volume not only delves into the military operations at the time, but also addresses concurrent issues related to diplomacy, US war policy, and the involvement of enslaved people in the Federal offensive.

On June 14, 1863, US Major General John Adams Dix received the following directive from General-in-Chief Henry Halleck: “All your available force should be concentrated to threaten Richmond, by seizing and destroying their railroad bridges over the South and North Anna Rivers, and do them all the damage possible.” With General Robert E. Lee and the Army of Northern Virginia marching toward Gettysburg and only a limited Confederate force guarding Richmond, Halleck sensed a rare opportunity for the Union cause.

In response, Dix, who had lived a life of considerable public service but possessed limited military experience, gathered his men and began a slow advance. During the ensuing operation, 20,000 US troops would threaten the Confederate capital and seek to cut the railroads supplying Lee’s army in Pennsylvania. To some, Dix’s campaign presented a tremendous chance for US forces to strike hard at Richmond while Lee was off in Pennsylvania. To others, it was an unnecessary lark that tied up units deployed more effectively in protecting Washington and confronting Lee’s men on Northern soil.

Gettysburg’s Southern Front also points to the often-unrecognized value in examining events of the US Civil War beyond the larger famous battles and campaigns. At the time, political and military leaders on both sides carefully weighed Dix’s efforts at Richmond and understood that the offensive had the potential to generate dramatic results. In fact, this piece of the Gettysburg Campaign may rank as one of the Union war effort’s more compelling lost opportunities in the East, one that could have changed the course of the conflict.