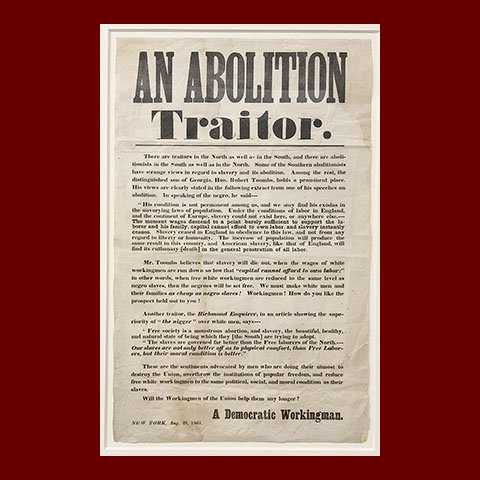 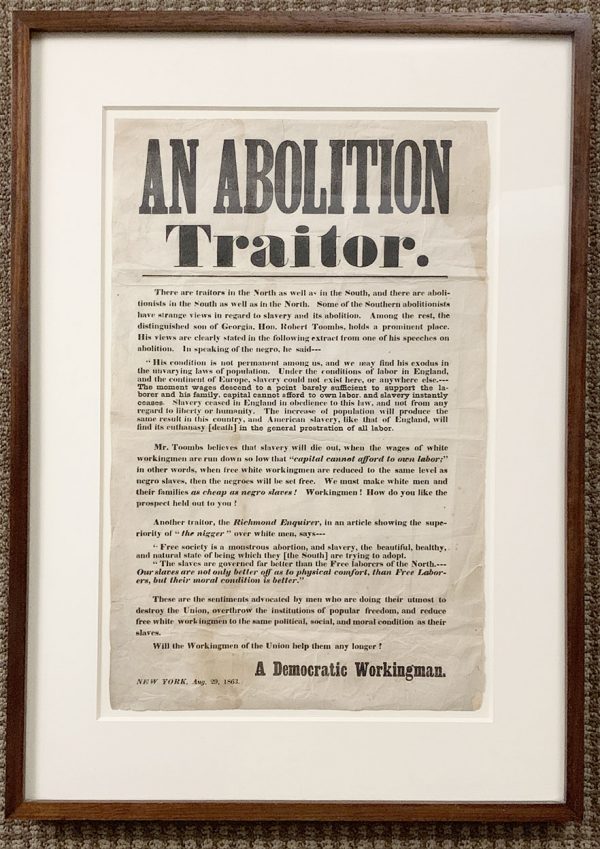 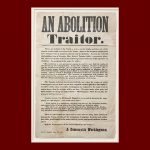 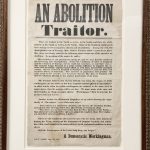 This Broadside, titled An Abolition Traitor is an editorial written by an anonymous laborer and published shortly after the infamous New York Draft Riots of July.  The broadside quotes Robert Toombs, “the moment wages descent to a point barely sufficient to support the laborer and his family, capital cannot afford to own labor, and slavery instantly ceases” and goes on to accuse some Southerners of trying to reduce free white workingmen to the condition of their slaves. Signed “A Democratic Workingman”

“Workingman” notes that, hidden behind Tombs’s pseudo-abolitionist position is the reduction of white labor to penury.  He then goes onto another example being one of the typical Southern mantras that “Slavery [is] the beautiful, healthy and natural state of being…Our slaves are not only better off as to physical comfort than Free Laborers, but their moral condition is better” — Attributed to The Richmond Enquire.

“Workingman” asks the workingman to stand firmly against this current. The author is targeting the white labor class of the North. “Workingman” calls Southern abolitionists “traitors” because he believes they want the freedom of African enslaved people at the expense of the labor and wages of white laborers. The editorial also accuses The Richmond Enquirer of being traitorous because it has criticized the society that supports free labor. In both cases the editorial states that these traitors “are doing their utmost to destroy the Union.”

OCLC notes that This is one of nine broadsides attributed to Sinclair Tousey and W. O. Bourne of New York City (two of them have their imprint).  They are associated with the New York Draft Riots of 1863, which was there inception. The author is hostile towards the  Confederacy’s attempt to destroy the country and goes behind some alleged abolitionist views to emphasize his own views.

It is in better condition than most museum examples.  Intact except for a very small corner chip and a few small closed marginal tears; slight water-tiding does not hinder the text.

(Abolition Broadside) AN ABOLITION TRAITOR. (line device) There are traitors in the North as well as in the South, and there are abolitionists in the South as well as in the North … Will the workingmen of the Union help them any longer? (Signed) A Democratic Workingman.  New York, Aug. 29, 1863.  (Sold by Sinclair Tousey.)  1 sheet (1 page); approx.. 11-7/8” x 18-5/8” (slightly irregular); and handsomely framed to museum standards to 18” x 25”.  It is in better condition than most museum examples.  Intact except for a very small corner chip and a few small closed marginal tears; slight water-tiding does not hinder the text.