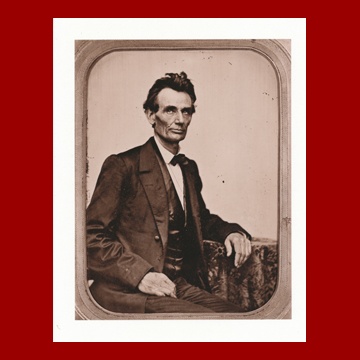 A Modern Photograph of Abraham Lincoln, originally taken in 1860.

Two days after his nomination for president in the Republican Convention at Chicago’s Wigwam, delegate Marcus Ward of Newark, NJ came down to Springfield with the group formally advising Lincoln of that nomination.

Ward asked Lincoln for a photograph, but he had no satisfactory one (the more famous beardless Alexander Hesler photographs, O-26 & 27, were still to be taken on June 3rd).  So Lincoln stated, “We will walk out together and I will sit for one.”  This image is the result.

Eyes lifted upward, hair a bit askew, suit and vest clear, and his eyeglass cord visible, Lincoln’s lengthy fingers and hands compete with that gaunt but determined face of his.