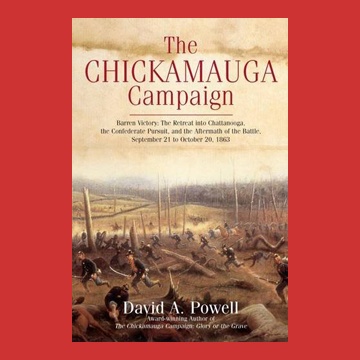 David Powell’s The Chickamauga Campaign: Barren Victory, is the final installment of his monumental trilogy on the Chickamauga Campaign. The book examines the immediate aftermath of this great battle with unprecedented clarity and detail. Confederate Gen. Braxton Bragg has won the signal victory of his career, but has yet to fully grasp that fact or the fruits of his success. Unfortunately for the South, three grueling days of combat has broken down the Army of Tennessee and made a vigorous pursuit nearly impossible. In addition to carefully examining the decisions made by each army commander and their consequences, Powell sets forth the dreadful costs of the fighting in terms of the human suffering involved.

David Powell’s Chickamauga Trilogy is now complete, with the fighting in the hills and valleys of North Georgia finally receiving the extensive treatment it has so long deserved.