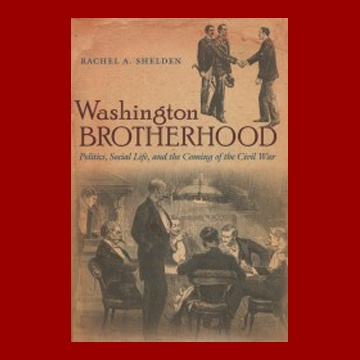 In Washington Brotherhood, Rachel Shelden paints a more nuanced portrait of Washington as a less fractious city with a vibrant social and cultural life.

Traditional portrayals of politicians in antebellum Washington, D.C., describe a violent and divisive society, full of angry debates and violent duels, a microcosm of the building animosity throughout the country. But politicians from different parties and sections of the country interacted in a variety of day-to-day activities outside traditional political spaces and came to know one another on a personal level.

Shelden shows that this engagement by figures such as Stephen Douglas, John Crittenden, Abraham Lincoln, and Alexander Stephens had important consequences for how lawmakers dealt with the sectional disputes that bedeviled the country during the 1840s and 1850s–particularly disputes involving slavery in the territories. Shelden uses primary documents–from housing records to personal diaries–to reveal the ways in which this political sociability influenced how laws were made in the antebellum era.

Ultimately, this Washington “bubble” explains why so many of these men were unprepared for secession and war when the winter of 1860-61 arrived.

Rachel joined us on Virtual Book Signing in January 2104. Watch the program.