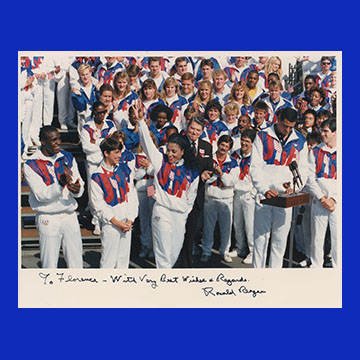 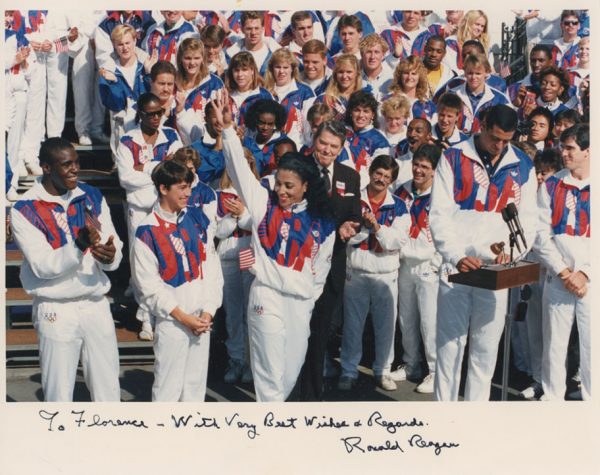 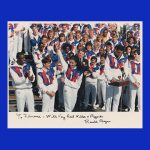 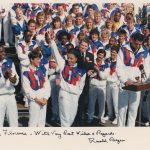 Ronald Reagan inscribes and signs a photograph to the late Florence Joyner. Shows Reagan in the middle of a group portrait of the 1988 American Olympic Team, all in uniforms.  In the front Florence Joyner waves to the crowd.  Reagan is seen just behind her, clapping and with obvious determined pride on his face. Matt Biondi is at the podium looking down at his remarks. Biondi, a competitive swimmer, took home five Gold Medals from the Seoul Olympics that summer.

The late Olympian, Florence Joyner’s 1988 record for both the 100 meter and 200 meter still stand today. She won three gold medals in the 1988 Olympics. In 1987, she married Al Joyner, the 1984 Olympic triple jump champion. Florence Joyner passed away in 1998. Our current group of female athletes owe a great deal to “Flo-Jo.” She kept her hair long, and wore jewelry in a sport that historically favored speed over personal expression. She achieved both, flawlessly. Her adventurous fashion acumen paved the way for Serena and Venus Williams’ exciting choices. Serena’s 2021 Australian Open single bare-leg look echoes Flo-Jo’s “one legger” from the late ’80s. There’s another photograph, signed by Reagan, also available.