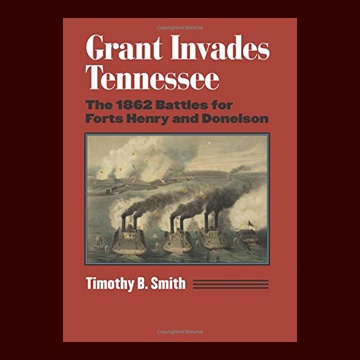 In Grant Invades Tennessee, award-winning Civil War historian Timothy B. Smith gives readers a battlefield view of the fight for Forts Henry and Donelson, as well as a critical wide-angle perspective on their broader meaning in the conduct and outcome of the war.

When General Ulysses S. Grant targeted Forts Henry and Donelson, he penetrated the Confederacy at one of its most vulnerable points, setting in motion events that would elevate his own status, demoralize the Confederate leadership and citizenry, and, significantly, tear the western Confederacy asunder. More to the point, the two battles of early 1862 opened the Tennessee River campaign that would prove critical to the ultimate Union victory in the Mississippi Valley.  The first comprehensive tactical treatment of these decisive battles, this book completes the trilogy of the Tennessee River campaign that Smith began in Shiloh and Corinth 1862, marking a milestone in Civil War history.

As new; d.j.; signed. Out of Print in Hardcover