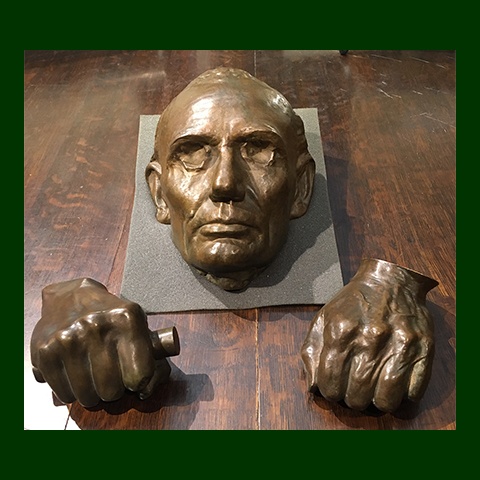 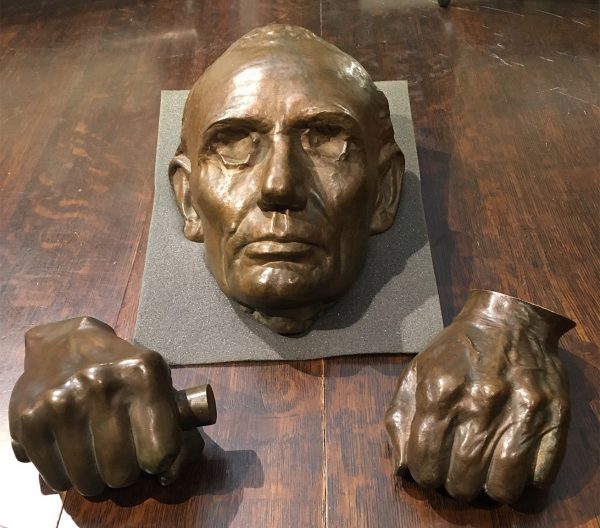 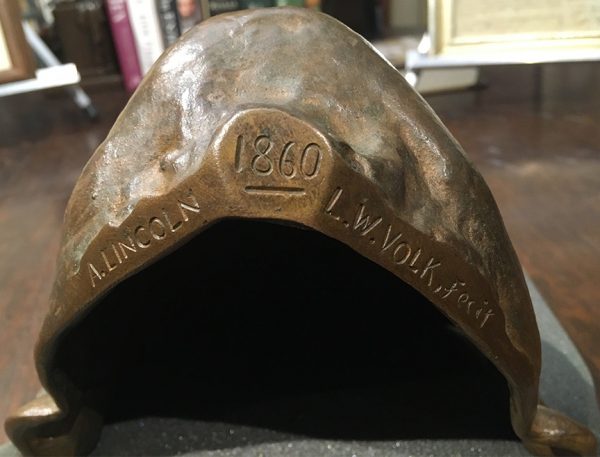 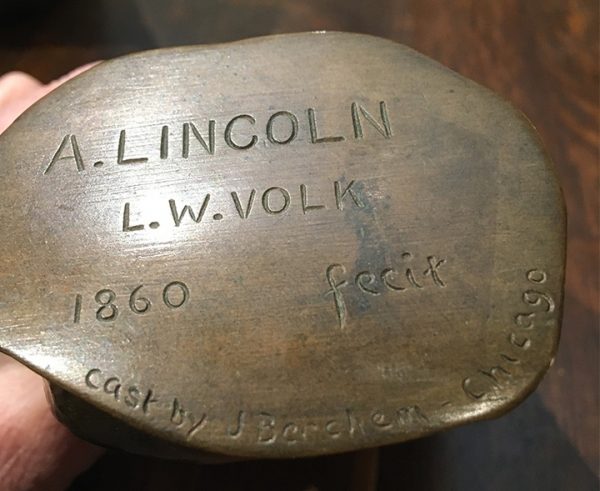 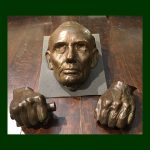 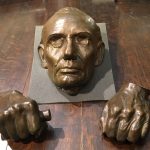 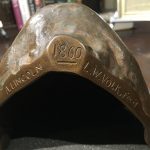 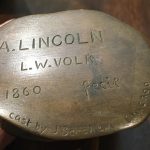 This set of Abraham Lincoln’s Life Mask and Hands is one of the finest we have ever seen here at the book shop.

Leonard Volk gave the mask to his artist son, Douglas, who thence presented it to his artist friend, Wyatt Eaton.  This mask now resides in the Smithsonian in Washington, DC.

While residing in Rome in 1870-72 (thankfully missing the Chicago fire), Volk had the noted formitore in plaster, Malpricari, produce molds of the original mask and hands all under his direction.  Upon returning to Chicago in 1873 Volk produced three mask replicas.

The First he gave to his son’s professor in the Beaux Arts, Jean-Leon Germone (they later went to Truman Bartlett and now are in the Massachusetts Historical Society). The Second he gave to Douglas who gave it to Wyatt Eaton to replace the original that landed in the Smithsonian (now it resides with the Zeta Psi fraternity at the University of Illinois). The Third was retained by Leonard and is known as the “Artist’s Copy.”It is this copy that was used by Berchem to produce copies at Leonard Volk’s Family’s behest in 1904-1913.

When Richard Gilder “discovered” the original mask residing with Wyatt Eaton, Gilder and Augustus St. Gaudens started a subscription drive to purchase the mask to donate it to the National Museum (now the Smithsonian).  33 replicas in plaster and bronze were produced as gifts to those who donated monies for the project of acquiring the original mask for the nation.

Volk certainly saw this commercial angle for his shaven mask and took advantage of that popularity by issuing his own mask and hands, but only in bronze and not in “cheap plaster!”By Volk’s commission, Berchem produced a set, now in the Abraham Lincoln Presidential Library and Museum.

Volk’s collaboration with Berchem is documented by the inscriptions on these mask and hands.  Berchem signed Volk’s name on the mask, “A. LINCOLN/1860/L.W. VOLK, fecit”.  On the cuffs of each hand it’s incised, “A. LINCOLN/L.W. VOLK/1860/fecit. // Cast by J. Berchem/Chicago”.

It is instrumental to note that the mask and hands we are offering are “signed” by Volk; he commissioned them, using Jules Berchem’s foundry, so they are rightfully considered as originals of Volk himself.  In contrast, the St. Gaudens replicas are not signed (incised) by Volk, as St. Gaudens rightly knew these were not Volk productions and should not bear the artist’s representative name or signature.

Jules Berchem (1855-1930), owner of the American Art Bronze Factory in Chicago and European educated, was a master artisan in art bronze, known for making large statues (such as the pair of lions in front of Chicago’s Art Institute and Leonard Volk’s Lincoln atop the Soldiers’ and Sailors’ Monument in  Rochester, New York) each executed under his hand and direction.  He came to be regarded as America’s master artisan in art bronze, collaborating with the foremost sculptors in his faithful reproduction of their works “ Volk being one of them.