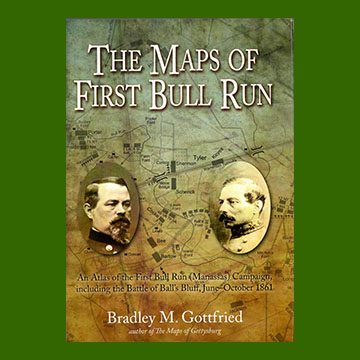 Bradley M. Gottfried’s The Maps of First Bull Run: An Atlas of the First Bull Run (Manassas) Campaign, Including the Battle of Ball’s Bluff, June-October, 1861, is another offering in a fine series of cartographic histories of Civil War battles.

This contribution to the Savas Beatie Military Atlas Series breaks down the campaigns into fifty-one map sets that tell the story of the first great battle of the Civil War. The most intense combat on Henry House Hill saw both sides fighting back and forth across the same small patch of ground for most of the afternoon. Having this fine, chronological, atlas in hand will make sense of what was happening, especially for the battlefield explorer who is visiting the field for the first time. Gottfried’s cartographic exploration of the little battlefield at Ball’s Bluff is equally fascinating and valuable. Part of a fantastic series that includes maps studies of Chickamauga and Antietam.