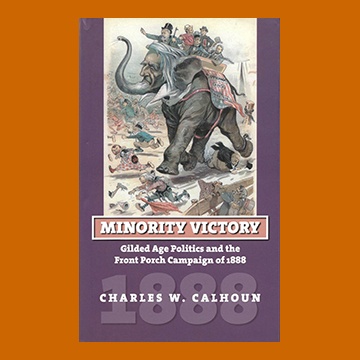 In Minority Victory: Gilded Age Politics and the Front Porch Campaign of 1888, Charles Calhoun gives us the fascinating story of the presidential campaign of 1888.

Benjamin Harrison took the White House with a minority of the popular vote. Calhoun shows how this presidential contest not only exemplified Gilded Age politics but also marked a major shift from divisive sectional rhetoric to an emphasis on voters; economic concerns. Charles Calhoun is also the author of the finest history of the U.S. Grant administration, also available.

As new; dust jacket, signed by the author.

ABOUT THE AMERICAN PRESIDENTIAL ELECTIONS SERIES

Every presidential election has been a fascinating story with stakes crucial to the future of the nation, no matter who the candidates were. We will feature some books from this fine series during the course of this presidential campaign season.