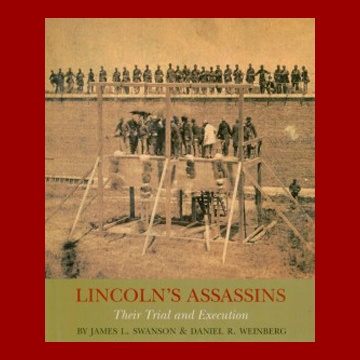 It was the crime of the nineteenth century, and it led to the most notorious trial in American history. On April 14, 1865, the president of the United States went to the theatre. The rest of the story barely needs retelling. On that night John Wilkes Booth assassinated Lincoln and soon the murderer was hunted down and killed by federal troops. But the story of the Lincoln assassination does not end with the slain president’s state funeral and the death of his killer. The book is not a complete or definitive history of the Lincoln murder. Instead it is about what happened after the assassination and the hunt for the conspirators.

It is the first illustrated history of the arrest, trial, and execution of the assassins. The authors report not only what happened, but how what happened was reported to the American people, illustrating the events through the prism of 19th-century American popular culture. Highlights include original albumen prints, cartes de visite, stereo cards, reward posters for the conspirators, the trial transcripts, the manuscript order for execution, and the seminal series of photographs by the famed Civil War photographer Alexander Gardner of the conspirators in prison and during their execution.

In the most important series of American historical photos ever made, Gardner, who obtained special permission from the War Department to record the scene, photographed the awaiting scaffold; the condemned on the scaffold as they listened to the sentence of death read aloud to them and as they were bound, hooded, and fitted with nooses; and the conspirators hanging in death. The authors have tracked down examples of all of Gardner’s photos in the series, including the shocking and rarely seen image of the conspirators taken moments after the trap was sprung while they were still alive, swinging through the air in their death struggle.

Other highlights will be the large number of quotations from contemporary newspapers and eyewitness accounts, allowing the reader to experience the trial and execution of Lincoln’s assassins in the same way that Americans alive in 1865 experienced them. In many ways, this book is a history of the customs and practices of journalism, publishing, and photography at the close of the Civil War. Signed by both authors.

1st ed., Signed by Daniel Weinberg. Personalized inscriptions available; use the Notes field on the order form to specify yours. All inscriptions are at the discretion of the author.