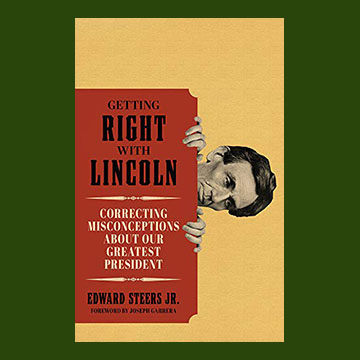 In Getting Right With Lincoln: Correcting Misconceptions about Our Greatest President, Lincoln assassination scholar and author, Ed Steers, sets the record straight about some of the most prominent misconceptions about Lincoln’s life.

Steers investigates claims that have found a foothold in mainstream lore, ranging from the contention that Lincoln had a troubled and perhaps scandalous early adulthood in Springfield, to more serious attacks on his character, such as the accusation that he was reluctant to emancipate enslaved people and held racist beliefs.

Drawing on his background in health science, Steers also examines allegations that Lincoln suffered numerous illnesses — from endocrine disorders to syphilis. Much of the recent revisionist history about Abraham Lincoln relies on selective sources that provide a false image of the man. His law partner of twenty-one years, close friend, and early biographer William Herndon described Lincoln as “the most shut-mouthed man” he ever knew, and yet volumes have been written on Lincoln’s musings, beliefs, and private thoughts in general.

His life and deeds have been heavily researched, interpreted, and reinterpreted time and again until the interpretations themselves have become untrustworthy. In this book, Steers relies on primary textual evidence to address each legend at the source and maintains caution when reviewing the potentially biased reminiscences of historic figures close to the president. The result is a fascinating forensic exploration of some of the persistent hoaxes and myths related to America’s most revered president. T