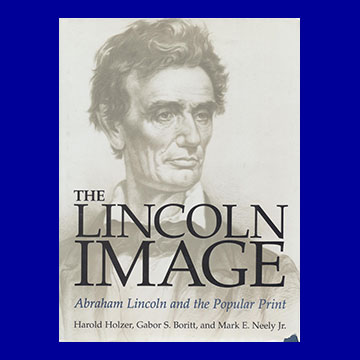 The Prints and the Photos that Made Them

Harold Holzer, Gabor Boritt and Mark Neely teamed up to bring us The Lincoln Image, a chronicle of how printmakers chronicled and influenced Lincoln’s transfiguration into an American icon.

Focusing on prints produced in Lincoln’s lifetime and in the iconographically important months immediately following his death, this lavishly illustrated volume pairs original photographs and paintings with the prints made from them. Featuring the work of Currier and Ives, John Sartain, and other artists, the juxtaposition reveals how the printmakers reworked the original images to refine Lincoln’s appearance, substituting his image for those of earlier politicians or adding a beard to images of him that originally appeared clean-shaven. The Lincoln Image also includes wartime cartoons, Lincoln family portraits (most of which appeared after the assassination), and renderings of the fateful moment of the shooting at Ford’s Theatre.

In addition to discussing the prints themselves, prominent Lincoln scholars Harold Holzer, Gabor S. Boritt, and Mark E. Neely Jr. examine the political environment of the nineteenth century that sustained and helped to shape the market for political prints, showing how images of Lincoln were made, altered, and manipulated before, during, and after the Civil War.

Very good; stain on inside rear board, minor tear on d.j.