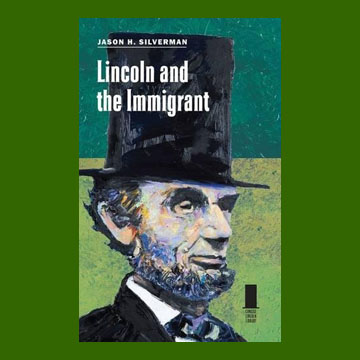 Jason Silverman, Lincoln and the Immigrant

Between 1840 and 1860, America received more than four and a half million people from foreign countries as permanent residents, including a huge influx of newcomers from northern and western Europe, hundreds of thousands of Mexicans who became U.S. citizens with the annexation of Texas and the Mexican Cession, and a smaller number of Chinese immigrants. While some Americans sought to make immigration more difficult and to curtail the rights afforded to immigrants, Abraham Lincoln advocated for the rights of all classes of citizens. In this succinct study, Jason H. Silverman investigates Lincoln’s evolving personal, professional, and political relationship with the wide variety of immigrant groups he encountered throughout his life, revealing that Lincoln related to the immigrant in a manner few of his contemporaries would or could emulate.

From an early age, Silverman shows, Lincoln developed an awareness of and a tolerance for different peoples and their cultures, and he displayed an affinity for immigrants throughout his legal and political career. Silverman reveals how immigrants affected not only Lincoln’s day-to-day life but also his presidential policies and details Lincoln’s opposition to the Know Nothing Party and the antiforeign attitudes in his own Republican Party, his reliance on German support for his 1860 presidential victory, his appointment of political generals of varying ethnicities, and his reliance on an immigrant for the literal rules of war.

Examining Lincoln’s views on the place of the immigrant in America’s society and economy, Silverman’s pioneering work offers a rare new perspective on the renowned sixteenth president.

This is part of the Concise Lincoln Library, produced by Southern Illinois University Press.