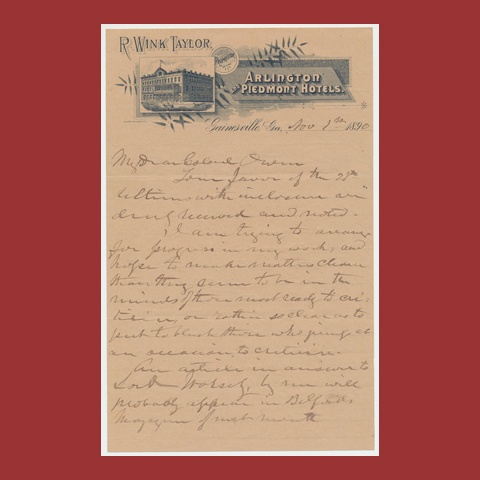 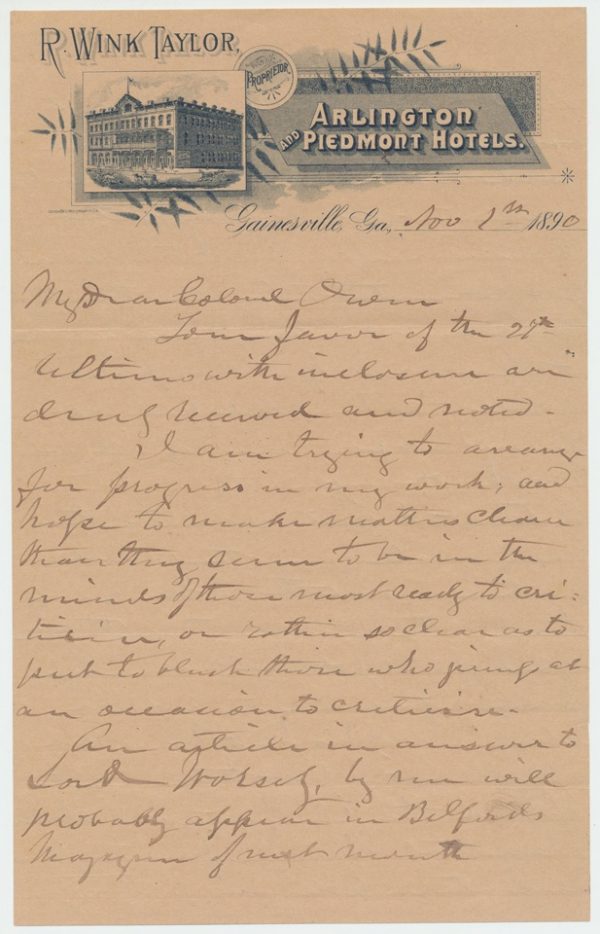 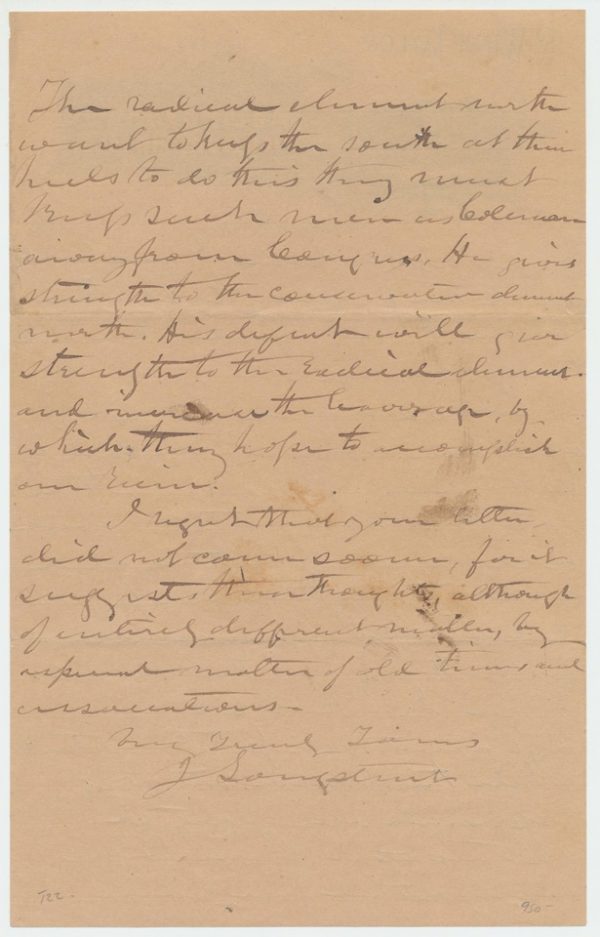 James Longstreet Autograph Letter, signed in which he writes his business partner, Colonel William Miller Owen, who had commanded the 1st Battalion of Longstreet’s Corps Artillery, the famous Washington Artillery.

After the war, Owen returned to New Orleans and he and Longstreet formed a brokerage business called Longstreet, Owen & Company. Owen also became Colonel of the re-organized Washington Artillery. He was instrumental in establishing the Confederate Memorial Hall.

My Dear Colonel Owen, You favor of the 27th ultimate with enclosures are now received and noted. I am trying to arrange for progress in my work, and hope to make matters clearer than they seem to be in the minds of those most ready to criticize, or rather so clear as to put to blush those who jump at an occasion to criticize. An article in answer to Lord Worsey by me will probably appear in Belford’s magazine of next month. Now I am going to ask you to excuse my trespass upon your good nature, and liberal sentiments by introducing politics. Coleman has done I think more for your state than all other of your members since he went to Congress. If he has failed to do all that he could have wished it was not for want of will or work. He represents your political interests to greater advantage than any or all your other members and represents the noble part of the southern character, although of a different political name. So far from representing the radical element of his party. He is more opposed by that party than are they opposed to the democrats and should we not take warning for that part and return Coleman and strengthen the south in the eyes of the world and particularly in the conservation elements of the north. If he fails to be returned his defeat will be enjoined often within evidence that he is not prepared to send representatives to Congress from their choicest ranks, even if their good Confederate soldiers tried and poured of their choicest blood. The democratic party doesn’t represent the political interests of the south, but say her political sentiments Coleman represents the former and if you can only return him, you will accomplish a grander feat, one that will do more to lift us up in the political world than has been done twenty five years and where all of your representatives are of such staff as Coleman the morning star of our triumph will rise beautifully bright. The hour been so long on the down grade that I have felt and feel still a desire to go to Louisiana to the aid of our dear comrade but my health will not justify the effort. If this can be of service to Coleman please let don’t hinder it. It must not appear in your name if he wishes to publish it. Let it be produced as a letter from one to a friend. Coleman does not known of the interest I feel in him, and it is not in him after all so much as the interest I feel in the people of Louisiana amongst whom I have heard and the people of the south for whom I have offered a thousand times my life.