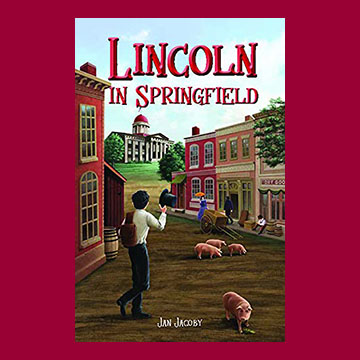 “Did He Strike You as a Rising Man?”

Picking up at the end of his award-winning debut Young Lincoln, Jan Jacobi’s Lincoln in Springfield continues the saga of Abraham Lincoln’s development, as the young man becomes a young professional and politician. This is a book for young people, recommended for 10-14 year-olds.

“Did he strike you as a rising man?”

This is the question that surrounds Abraham Lincoln, the freshly minted lawyer eager to take Springfield by storm. But how can he know if he is rising or falling when so much of his character is yet to be determined including who he loves, what sort of politics he wants to engage in, and even what he believes about key issues plaguing the nation?

No longer does Lincoln grapple with his upbringing and yearn for freedom to forge his own path, now he is firmly on it—albeit on a borrowed horse and with only tenuous ideas about who exactly it is he wants to become.

Follow along, from his time as a fledgling lawyer in Springfield to his first term as a Whig Congressman representing Illinois in Washington, D.C. As he argues cases, builds friendships with allies and rivals alike, marries, and begins his political career, the portrait of the presidential Lincoln will begin to emerge, though not without some stumbles along the way. Though he still doesn’t quite know the answer, Lincoln in Springfield Lincoln on his own for the first time—will begin to discern just what kind of person he is destined to be.

“In this fascinating second volume, Lincoln in Springfield, Jacobi’s Lincoln matures with the town and the nation, and comes to understand that their challenges are also to be his.” —Robert Bray, author of Reading with Lincoln

The prequel to Lincoln in Springfield, Young Lincoln, is also available.

Jan Jacobi joins us on A House Divided on September 22nd. Learn More.