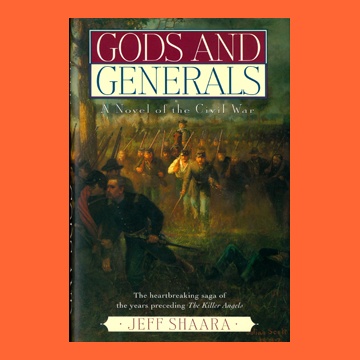 What Happened BEFORE The Killer Angels

The Killer Angels, Michael Shaara’s classic Civil War novel about the men who led the fight at the Battle of Gettysburg, won the Pulitzer Prize in 1975 and was a #1 bestseller. It was also the inspiration and served as the source for the screenplay for the 1993 movie, Gettysburg.

In Gods and Generals, Jeff Shaara sustains his father’s vision in an epic novel that follows the main characters of The Killer Angels on the tragic trail from Harper’s Ferry to Gettysburg.

Against the sweeping drama of the war stand the Commanders – Jackson, Hancock, Chamberlain, and Lee.  The four men meet on the field of battle for the first time at Fredericksburg, after which it seems that Lee will be able to overcome the odds and lead his army to victory.  But in the next great battle, at Chancellorsville, Lee and Jackson’s supreme achievement are overshadowed when Jackson is mortally wounded by his own men.  And so the march begins across the Potomac toward a small Pennsylvania town called Gettysburg.