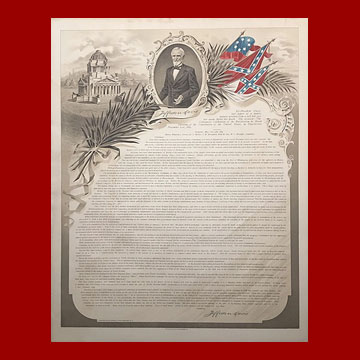 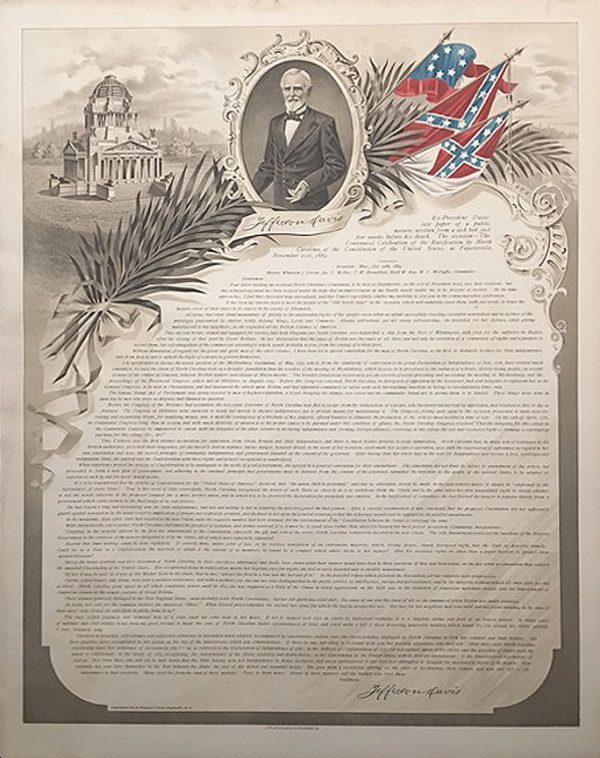 “Ex-President Davis’ last paper of a public nature, written from a sick bed just five weeks before his death.  The occasion “ The Centennial Celebration of the Ratification by North Carolina, of the Constitution of the United States at Fayetteville, November 21st, 1889.”

A letter of “regret” written to members of the committee inviting Davis to attend North Carolina’s centennial commemorative events.  At the top is a masterful engraving of Davis, with another facsimile signature below.  To his right are three full-color flags:  one CSA First National and two battle flags.  To his left is an image of a proposed (?) memorial or tomb for the CSA President.

This eloquently worded letter expounds on the issues of the Civil War (termed here War Between the States), primarily state’s rights, which the former Confederate president traces to the treaty of 1783.

Davis praises the bravery of the citizens of “The Old North State” and infers that Northern aggression was a direct violation of the Constitution, ignoring the very pact of independence guaranteed by the founding fathers.

He wistfully refers to North Carolinians, as well as citizens of “the old South”, to reflect upon the “river of their years” as he politely, and mournfully, declines this invitation to fete North Carolina’s history.  This reply of “regret” to attend might be a double entendre, incorporating also the very heart of “the lost cause.”