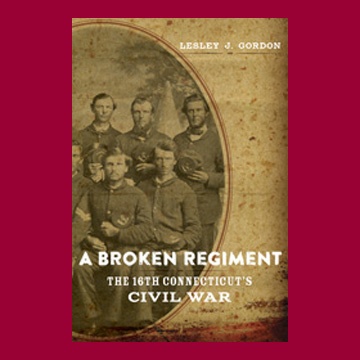 Broken Regiment: The 16th Connecticut’s Civil War recounts the tragic history of one of the Civil War’s most ill-fated Union military units.

Organized in the late summer of 1862, the 16th Connecticut Volunteer Infantry was unprepared for battle a month later, when it entered the fight at Antietam. The results were catastrophic: nearly a quarter of the men were killed or wounded, and Connecticut’s 16th panicked and fled the field. In the years that followed, the regiment participated in minor skirmishes before surrendering en masse in North Carolina in 1864.

Most of its members spent months in southern prison camps, including the notorious Andersonville stockade, where disease and starvation took the lives of over one hundred members of the unit. The struggles of the 16th led survivors to reflect on the true nature of their military experience during and after the war, and questions of cowardice and courage, patriotism and purpose, were often foremost in their thoughts. Over time, competing stories emerged of who they were, why they endured what they did, and how they should be remembered. By the end of the century, their collective recollections reshaped this troubling and traumatic past, and the “unfortunate regiment” emerged as the “Brave Sixteenth,” their individual memories and accounts altered to fit the more heroic contours of the Union victory.

The product of over a decade of research, Lesley J. Gordon’s A Broken Regiment shines a light on this unit’s complex history amid the interplay of various, and often competing, voices. The result is a fascinating and heartrending story of one regiment’s wartime and postwar struggles.