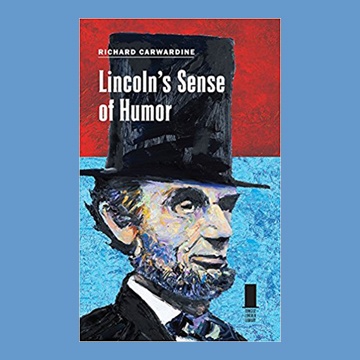 Oxford professor Richard Carwardine’s Lincoln’s Sense of Humor looks at one of Lincoln’s most endearing and useful personality traits. It’s part of the Concise Lincoln Library Series. Abraham Lincoln was the first president to make storytelling, jokes, and laughter tools of the office, and his natural sense of humor has become legendary.

Lincoln’s Sense of Humor registers the variety, complexity of purpose, and ethical dimension of Lincoln’s humor and pinpoints the political risks Lincoln ran in telling jokes while the nation was engaged in a bloody struggle for existence. Complete with amusing anecdotes, this book shows how Lincoln’s uses of humor evolved as he matured and explores its versatility, range of expressions, and multiple sources: western tall tales, morality stories, bawdy jokes, linguistic tricks, absurdities, political satire, and sharp wit. While Lincoln excelled at self-mockery, nothing gave him greater pleasure than satirical work lampooning hypocrisy and ethical double standards. He particularly enjoyed David R. Locke’s satiric writings by Petroleum V. Nasby, a fictional bigoted secessionist preacher, and the book explores the nuances of Lincoln’s enthusiasm for what he called Locke’s genius, showing the moral springs of Lincoln’s humor.

Richard Carwardine methodically demonstrates that Lincoln’s funny stories were the means of securing political or personal advantage, sometimes by frontal assault on opponents but more often by depiction through parable, obfuscation through hilarity, refusal through wit, and diversion through cunning. Throughout his life Lincoln worked to develop the humorist’s craft and hone the art of storytelling. His jokes were valuable in advancing his careers as politician and lawyer and in navigating his course during a storm-tossed presidency. His merriness, however, coexisted with self-absorbed contemplation and melancholy. Humor was his lifeline; dark levity acted as a tonic, giving Lincoln strength to tackle the severe challenges he faced. At the same time, a reputation for unrestrained, uncontrollable humor gave welcome ammunition to his political foes. In fact, Lincoln’s jocularity elicited waves of criticism during his presidency. He was dismissed as a “smutty joker,”a “first rate second rate man,” and a “joke incarnated.”

Since his death, Lincoln’s anecdotes and jokes have become detached from the context that had given them their political and cultural bite, losing much of the ironic and satiric meaning that he had intended. With incisive analysis and laugh-inducing examples, Carwardine helps to recapture a strong component of Lincoln’s character and reanimates the good humor of our sixteenth president.