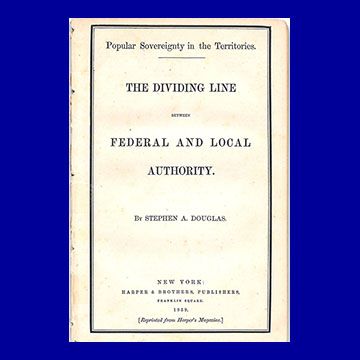 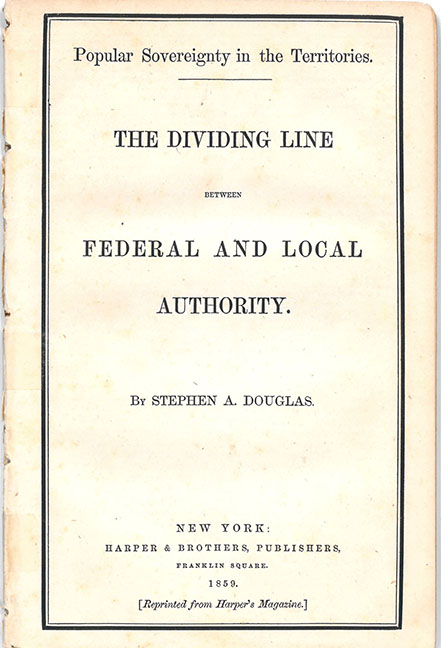 Stephen A. Douglas, Popular Sovereignty in the Territories, pamphlet

Douglas Champions His Policies During the Debates

Stephen A. Douglas’ Popular Sovereignty in the Territories argues for his plan to open the federal territories to slavery, should the residents so choose.

In doing so, he obliquely refers to Abraham Lincoln without deigning to name him. Citing “the Illinois canvass of 1858,” Senator Douglas quotes “the distinguished Republican standard bearer”(Lincoln), that “in my opinion it (slavery agitation) will not cease until a crisis shall have been reached and passed. “A House Divided Against Its Self Cannot Stand.” I believe that this government cannot endure permanently half slave and half free.” In so quoting Lincoln, Douglas presents the novel scene of trying to use one of Lincoln’s greatest speeches against him.

Douglas, Stephen A. POPULAR SOVEREIGNTY IN THE TERRITORIES. / THE DIVIDING LINE BETWEEN FEDERAL AND LOCAL AUTHORITY. New York: Harper & Brothers, 1858. 40p., wrappers, not in Monaghan.