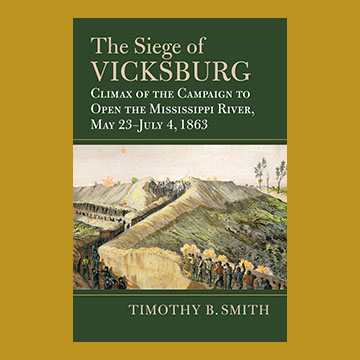 Timothy B. Smith, The Siege of Vicksburg, 1st ed., Signed on Bookplate

Takes Full Advantage of Resources,
Both Union and Confederate

In The Siege of Vicksburg: Climax of the Campaign to Open the Mississippi River, May 23 – July 4, 1863, noted Civil War scholar Timothy B. Smith offers the first comprehensive account of the siege that split the Confederacy in two.

While the siege is often given a chapter or two in larger campaign studies and portrayed as a foregone conclusion, The Siege of Vicksburg offers a new perspective and thus a fuller understanding of the larger Vicksburg Campaign. Smith takes full advantage of all the resources, both Union and Confederate–from official reports to soldiers’ diaries and letters to newspaper accounts–to offer in vivid detail a compelling narrative of the operations.

The siege was unlike anything Grant’s Army of the Tennessee had attempted to this point and Smith helps the reader understand the complexity of the strategy and tactics, the brilliance of the engineers’ work, the grueling nature of the day-by-day participation, and the effect on all involved, from townspeople to the soldiers manning the fortifications.

The Siege of Vicksburg portrays a high-stakes moment in the course of the Civil War because both sides understood what was at stake: the fate of the Mississippi River, the trans-Mississippi region, and perhaps the Confederacy itself. Smith’s detailed command-level analysis extends from army to corps, brigades, and regiments and offers fresh insights on where each side held an advantage. One key advantage was that the Federals had vast confidence in their commander while the Confederates showed no such assurance, whether it was Pemberton inside Vicksburg or Johnston outside. Smith offers an equally appealing and richly drawn look at the combat experiences of the soldiers in the trenches.

He also tackles the many controversies surrounding the siege, including detailed accounts and analyses of Johnston’s efforts to lift the siege, and answers the questions of why Vicksburg fell and what were the ultimate consequences of Grant’s victory.