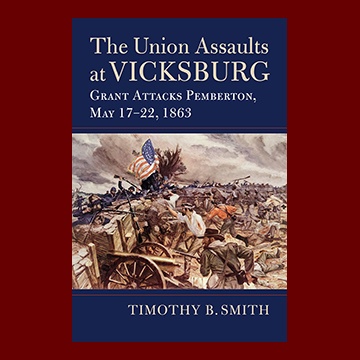 Timothy B. Smith, The Union Assaults at Vicksburg, 1st ed., Signed on Bookplate

Timothy Smith’s The Unions Assaults at Vicksburg: Grant Attacks Pemberton: May 17-23 1863 establishes a day-to-day — and occasionally minute-to-minute — timeline for this crucial week. It was the third week of May 1863, and after seven months and six attempts, Ulysses S. Grant was finally at the doorstep of Vicksburg.

What followed was a series of attacks and maneuvers against the last major section of the Mississippi River controlled by the Confederacy –and one of the most important operations of the Civil War. Grant intended to end the campaign quickly by assault, but the stalwart defense of Vicksburg’s garrison changed his plans.

The Union Assaults at Vicksburg is the first comprehensive account of this quick attempt to capture Vicksburg, which proved critical to the Union’s ultimate success and Grant’s eventual solidification as one of the most significant military commanders in American history.

Smith invites readers to follow the Vicksburg assaults as they unfold. His finely detailed account reaches from the offices of statesmen and politicians to the field of battle, with exacting analysis and insight that ranges from the highest level of planning and command to the combat experience of the common soldier.

As closely observed and vividly described as each assault is, Smith’s book also puts the sum of these battles into the larger context of the Vicksburg campaign, as well as the entire war. His deeply informed, in-depth work thus provides the first full view of a key but little-studied turning point in the fortunes of the Union army in the West, Ulysses S. Grant, and the United States of America.

As New, signed on bookplate.