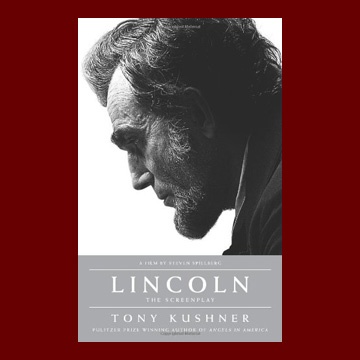 This is the screenplay for the movie Lincoln.

A decade-long collaboration between three-time Academy Award® winner Steven Spielberg and Pulitzer Prize winner Tony Kushner, Lincoln is the screenplay of the a revealing drama that focuses on the 16th President’s tumultuous final months in office.

This screenplay by Tony Kushner was loosely based on Doris Kearns Goodwin’s biography Team of Rivals: The Political Genius of Abraham Lincoln, and covers the final four months of Lincoln’s life, focusing on the President’s efforts in January 1865 to have the Thirteenth Amendment to the United States Constitution passed by the United States House of Representatives.

In hardcover. Signed by Tony Kushner and Doris Kearns Goodwin. Goodwin wrote the Foreword to this volume. Very Limited Quantities.