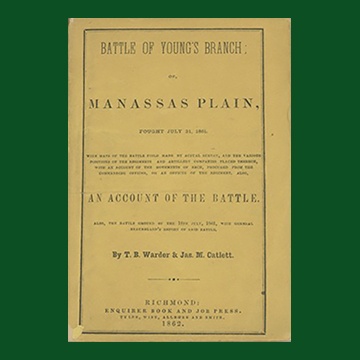 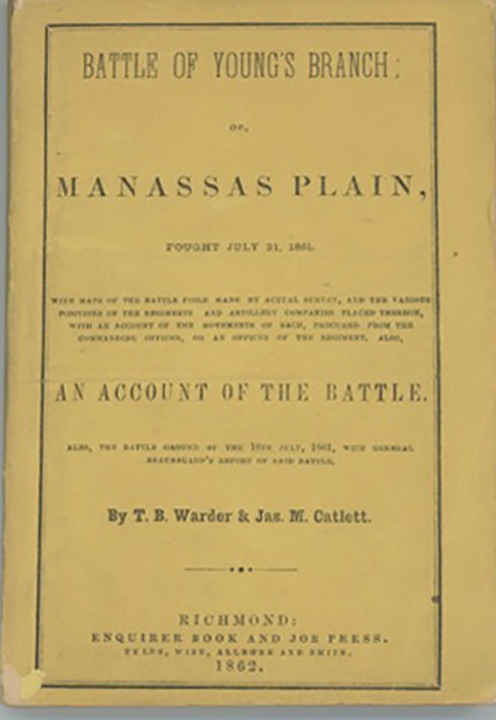 One of the first published accounts of the Battle of First Manassas available to southern readers was T. B. Warder & James Catlett’s Battle of Young’s Branch; or, Manassas Plain, Fought July 21, 1861″

The First Battle of Manassas was the most important fight of 1861, and the humiliating defeat to Union arms gave it a treasured place in Confederate memory. From the moment the victory was won southerners wanted to read its history, and the Warder and Catlett pamphlet is the original source of many First Manassas stories.

Of note, of course, was the idea of that time that the battle would be named for Young’s Branch, the insignificant water course below the Henry House, as opposed the more tactically important Bull Run. The pamphlet is a gemstone of collecting, being an important Confederate imprint, noted in three of the most important bibliographies. Richard Harwell states, “The maps are the best in any Confederate book.”

This copy is the uncommon variant, including one folding map.

Warder, T.B. & Catlett, James M. BATTLE OF YOUNG’S BRANCH; OR, MANASSAS PLAIN, FOUGHT JULY 21, 1861. WITH MAPS OF THE BATTLE FIELD BY ACTUAL SURVEY, AND THE VARIOUS POSITIONS OF THE REGIMENTS AND ARTILLERY COMPANIES PLACED THERON, WITH AN ACCOUNT OF THE MOVEMENTS OF EACH, PROCURED FROM THE COMMANDING OFFICERS, OR AN OFFICER OF THE REGIMENT. ALSO, AN ACCOUNT OF THE BATTLE. ALSO, THE BATTLE GROUND OF THE 18TH JULY, 1861, WITH GENERAL BEAUREGARD’S REPORT OF THE BATTLE. Richmond: Enquirer Book and Job Press. Tyler, Wise, Allegre and Smith, 1862. 156p., maps, map (fold), errata (Crandall 2662; Parrish 5100; Howes W101; Cornerstones of Confederate Collecting 5).