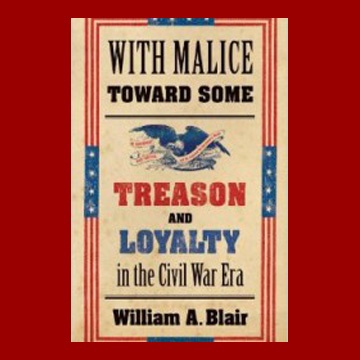 William A. Blair, With Malice Toward Some

With Malice Toward Some, William Blair shows how treason was defined not just by the Lincoln administration, Congress, and the courts but also by the general public revealingthe surprising implications for North and South alike.

Few issues created greater consensus among Civil War-era northerners than the belief that the secessionists had committed treason. But as William A. Blair shows in this engaging history, the way politicians, soldiers, and civilians dealt with disloyalty varied widely.

Citizens often moved more swiftly than federal agents in punishing traitors in their midst, forcing the government to rethink legal practices and definitions. In reconciling the northern contempt for treachery with a demonstrable record of judicial leniency toward the South, Blair illuminates the other ways that northerners punished perceived traitors, including confiscating slaves, arresting newspaper editors for expressions of free speech, and limiting voting. Ultimately, punishment for treason extended well beyond wartime and into the framework of Reconstruction policies, including the construction of the Fourteenth Amendment.

John joined us on Virtual Book Signing in May, 2014. Watch the program.