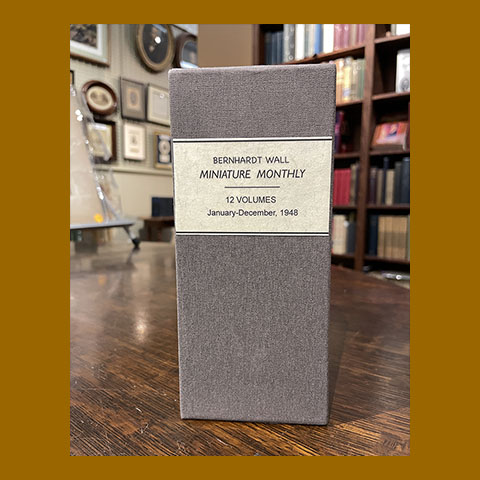 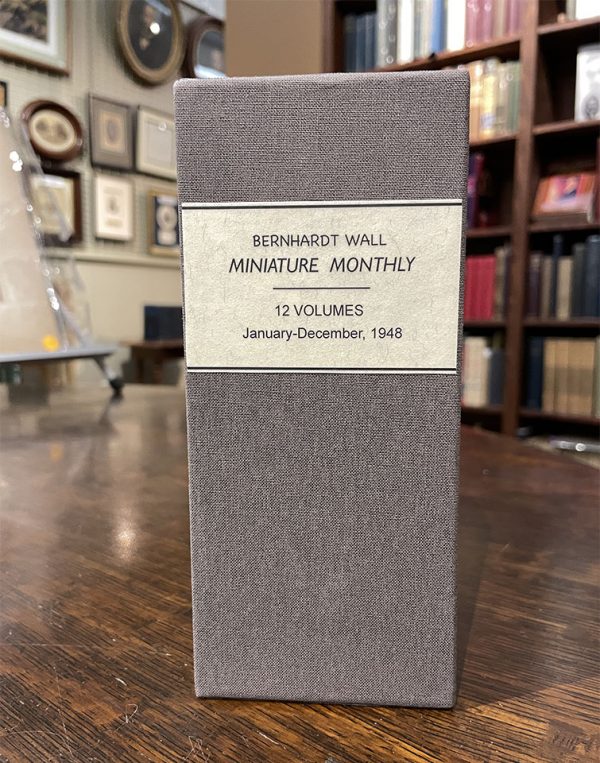 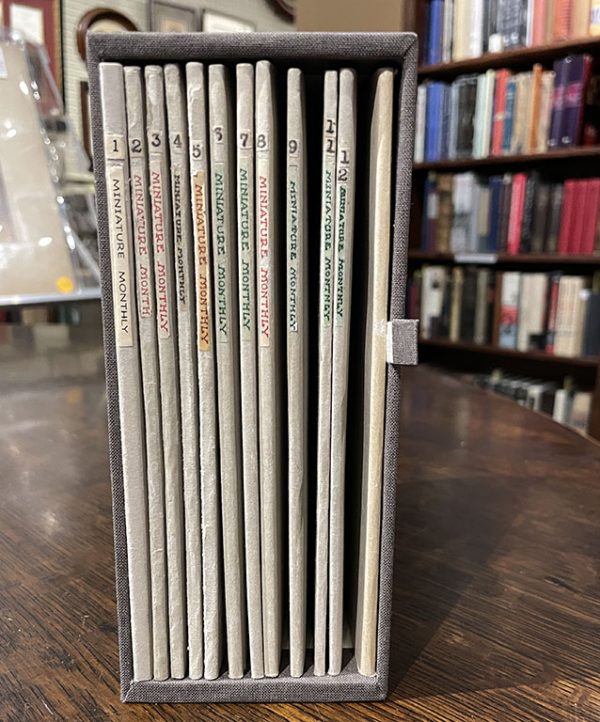 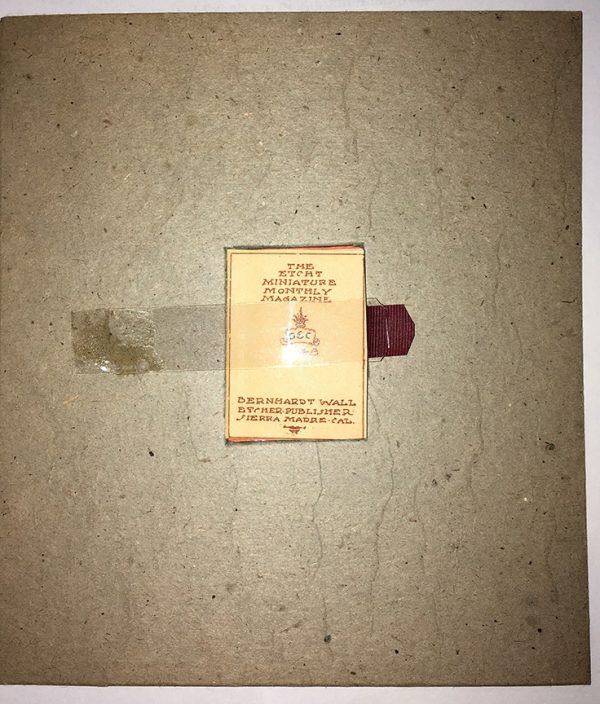 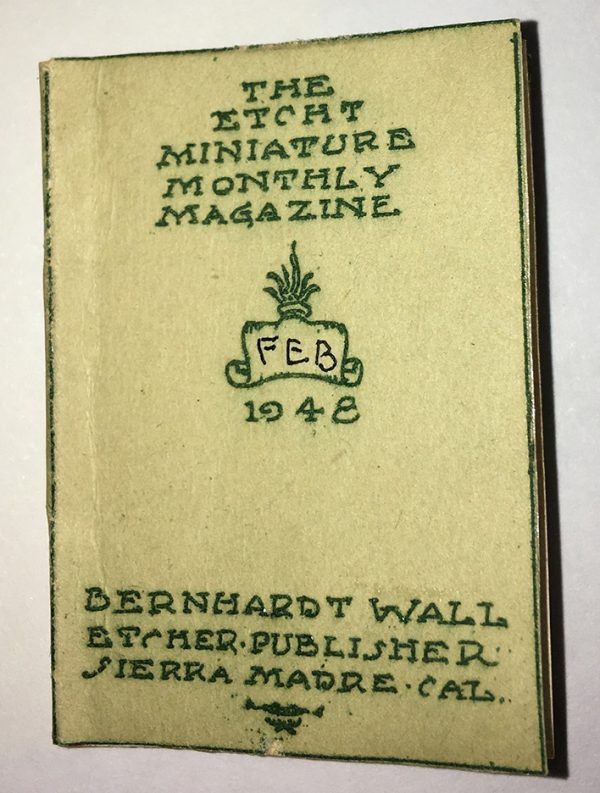 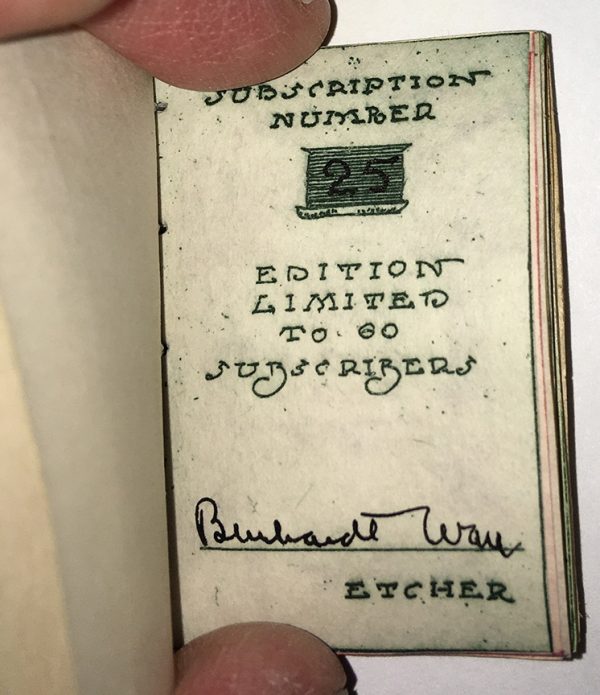 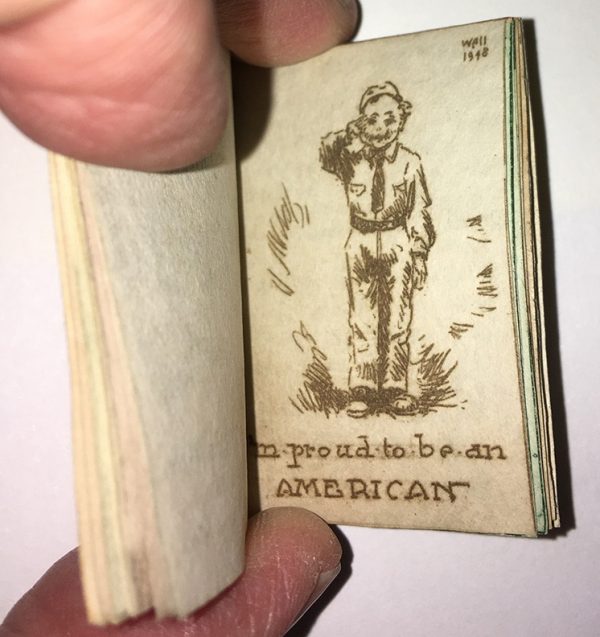 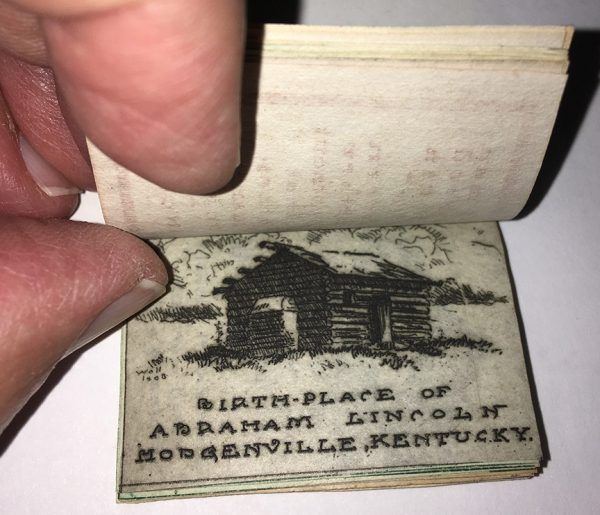 “The Most Famous Miniature Magazine Ever Published”

A rare complete run of Wall’s miniature periodical, focusing on American historical figures and themes, including numerous articles and images of Lincoln and places in his life.

As an example, the May 1948 issue contains a Memorial Day message, a 1918 letter of Woodrow Wilson, Lincoln as Postmaster, and reminiscences of Edwin Markham and of Walt Whitman. Each of these has at least one sketch, e.g. Wilson as Commander-in-Chief in a dough-boy’s uniform and Lincoln reading a newspaper while leaning against a counter.

Sketches of Havana, Cuba, Markham’s bookplate, and Whitman’s home are also included: all in all 15 full-page etchings and 12 text-page etchings.  Plus:  front board, title page, contents, and “Men of May” with dates of birth, and Wall’s famous logo – a cowboy riding his horse – round out the finely drawn etchings.

Bernhardt T. Wall was an American historian of the west and lithographic illustrator. Wall studied at the Arts Students League of Buffalo; then moved on to study in New York. Beginning a career as a lithographic illustrator in 1889, he worked primarily as a commercial artist in New York and Buffalo. He designed more than 5,000 comic cards, and became known as the “postcard king.” Many were American “patriotic” and “propaganda” cards printed during World War I.

1915 marked a defining point in his life. Wall visited Colorado, Nevada and California, producing innumerable etchings on western themes: cities, small towns, Native Americans and cowboys. He published them in a portfolio entitled Under Western Skies. They proved very successful and Wall moved to California permanently. He continued to produce many fine etchings of the American West. By 1930, had become a respected historian of the region.

Bernhardt Wall was unique in that he not only drew the etchings for his books, but he also printed and bound them. He was a pioneer etcher and producer of fine press. Historians of fine press printing have compared him to William Blake. His books are in many libraries and universities around the world; and his works were also in the private collections of J. P. Morgan, Franklin Roosevelt, and Henry Frick. Wall etched three sitting presidents of the United States: Theodore Roosevelt, Warren Taft and Calvin Coolidge. Other prominent individuals etched by wall include Sam Houston, Mark Twain, Thomas A. Edison, Andrew Jackson, Thomas Jefferson and of course, Abraham Lincoln.