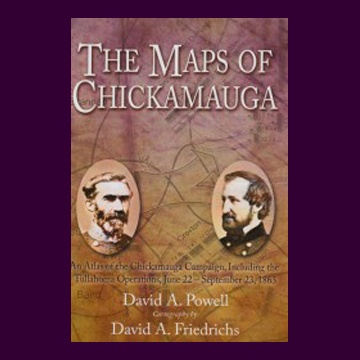 Third in a new series of campaign studies that take a different approach toward military history, The Maps of Chickamauga explores this largely misunderstood battle through the use of 120 full-color maps, graphically illustrating the complex tangle of combat’s ebb and flow that makes the titanic bloodshed of Chickamauga one of the most confusing actions of the American Civil War.

Track individual regiments through their engagements at fifteen to twenty-minute intervals or explore each army in motion as brigades and divisions maneuver and deploy to face the enemy. The Maps of Chickamauga allows readers to fully grasp the action at any level of interest. The maps lay out the troops and terrain as they were in September of 1863. Opening and closing chapters describe each army’s approach to the battlefield and the retreat and pursuit to Chattanooga in the aftermath of the bloody combat. In between, sections are devoted to the fighting of September 18, 19, and 20, following the battle as it unfolds from a series of limited collisions between isolated columns into the bloody action of the last two days. Situation maps reflect the posture of each army on an hourly basis, while tactical maps reveal the intricacies of regimental and battery movements. The text accompanying each map explains the action in succinct detail, supported by a host of primary sources.

Eyewitness accounts vividly underscore the human aspect of the actions detailed in the maps as brigades and regiments collide. Meticulously researched and footnoted by David Powell with cartography by David Freidrichs, The Maps of Chickamauga relies on the participants’ own words to recreate the course of battle. The Maps of Chickamauga is an ideal companion for battlefield bushwhacking or simply armchair touring. Full color brings the movements to life, allowing readers to grasp the surging give and take of regimental combat in the woods and fields of North Georgia.