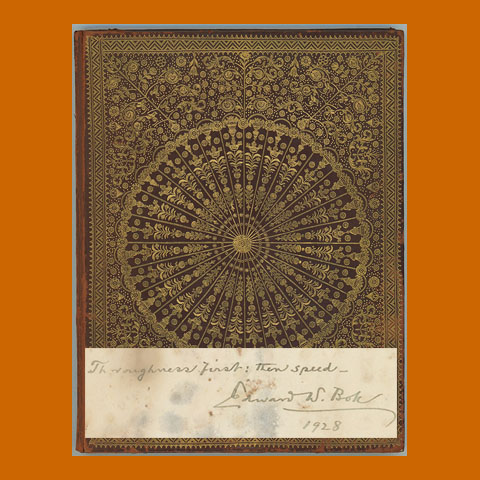 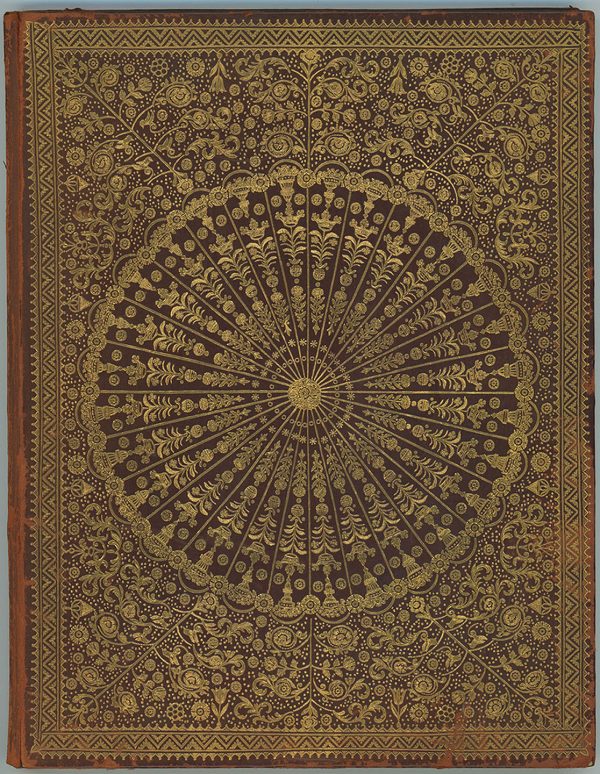 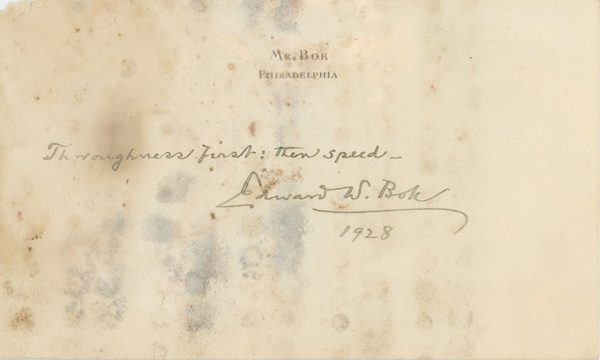 Edward Bok’s The Man in the White House, with a signed sentiment by Edward Bok. Dutch immigrant Edward Bok, long-time editor of the Ladies Home Journal, where he advocated for progressive causes, including women’s suffrage, saving the environment, public sex education, education on prenatal care and children’s health, and pacifism. In 1921 he won the Pulitzer Prize for Biography for his book, The Americanization of Edward Bok. He was an accomplished author, publisher, and philanthropist.

This book was produced as a New Year’s gift for friends. It is almost never found on bibliographies listing Bok’s works.  It would be his his last book. He passed away early in January 1930. Written in the form of a dialogue between a narrator and a “Critic,” Bok provides an earnest reflection on Presidential courage during war time.  Written in the wake of Woodrow Wilson’s death, the reader would have assumed the essay was about the 28th president. The true subject of the book is not revealed until the very last words. It is actually about Abraham Lincoln!

NOTE: The Hindu swastika symbol used by that small Marion, Pennsylvania press predates its modern association with the Nazi party. It is a symbol of divinity and spirituality in many spiritual practices throughout Eurasia. The symbol is also part of Celtic, Norse and Germanic mythology. At the heart of many of these traditions, it is a symbol that was  as powerful as today’s Christian cross. It’s existence was part of many cultures long before it’s adoption by Germany’s Nazi Party.  None of the content of this work reflects that ideology.

This is truly a rare book. We have seen a mere seven copies on the market in over 49 years. Also included is an autograph sentiment, signed on Bok’s personally embossed card.

Card has staining, but Bok’s writing is easily read. The book is  excellent; lightly worn at extremities and along spine edges as usual.

Bok, Edward and Mary.  THE MAN IN THE WHITE HOUSE: A BIT OF THOUGHT FOR EVERY DAY IN THE YEAR AHEAD / CARRYING WITH IT THE HEARTFELT WISHES FOR A YEAR OF HAPPY REALIZATION OF YOUR CLOSEST DESIRES.  Merion, Pennsylvania: Swastika, 1929.  1st edition.  Full leather; florid hand gilding on both boards.  [Not in Monaghan]  WITH: Autograph Sentiment, signed on Bok’s personally embossed card, “Mr. Bok / Philadelphia”:  “Thoroughness first: then speed.  / Edward W. Bok / 1928.”