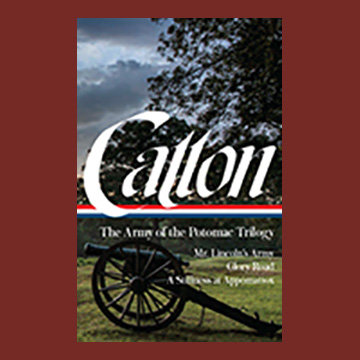 An Essential Classic in a Single-volume,  Collector’s Edition

Bruce Catton’s Army of the Potomac trilogy is a landmark of historical storytelling, one of the most popular and influential works ever written about the Civil War. And yet for decades it has been unavailable in full. Now, Library of America restores the entirety of this essential classic to print in a deluxe, single-volume collector’s edition, with full-color endpaper maps, and detailed notes and a newly-researched chronology of Catton’s life and career by acclaimed Civil War scholar Gary W. Gallagher.

Mr. Lincoln’s Army, the first book in the trilogy, describes the Army of the Potomac’s formation as the bulwark of the Union war effort as emerging friction between the army’s commanding general George McClellan and the Commander in Chief in Washington reaches a crisis in the wake of the deadly battle at Antietam.

Glory Road recounts the critical months between the autumn of 1862 and midsummer 1863, including the battles at Fredericksburg, Rappahannock and Chancellorsville which set the state for the costly Union victory as Gettysburg. Catton’s retelling of the story of Lincoln’s address at Gettysburg remains unrivalled.

In A Stillness of Appomattox, which won both Pulitzer Prize and the National Book Award, the Army of the Potomac, now under the driving command of Ulysses S. Grant, finally gains the upper hand against Robert E. Lee, culminating in one of the most vividly drawn accounts of Lee’s final surrender.

This handsome volume includes a satin draw ribbon, color endpapers, and an eight-page section of color maps. This is a lovely gift!