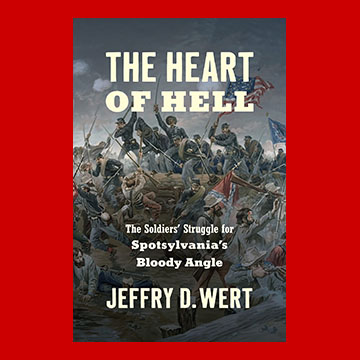 Jeffry Wert’s The Heart of Hell examines the struggle over the fortified Confederate position known as Spotsylvania’s Mule Shoe.

A Union assault that began at 4:30 A.M. on May 12, 1864, sparked brutal combat that lasted nearly twenty-four hours. By the time Grant’s forces withdrew, some 55,000 men from Union and Confederate armies had been drawn into the fury, battling in torrential rain along the fieldworks at distances often less than the length of a rifle barrel. One Union private recalled the fighting as a “seething, bubbling, soaring hell of hate and murder.”

By the time Lee’s troops established a new fortified line in the predawn hours of May 13, some 17,500  officers and men from both sides had been killed, wounded, or captured when the fighting  ceased. The site of the most intense clashes became forever known as the Bloody Angle.

Here, renowned military historian Jeffry D. Wert draws on the personal narratives of Union and Confederate troops who survived the fight  to offer a gripping story of Civil War combat at its most difficult. Wert’s  harrowing tale reminds us that the war’s story, often told through its commanders and campaigns, truly belonged to the common soldier.